In video posted on social media, mob can be seen abusing and hitting 65-year-old Samiyuddin, at times pulling his beard. 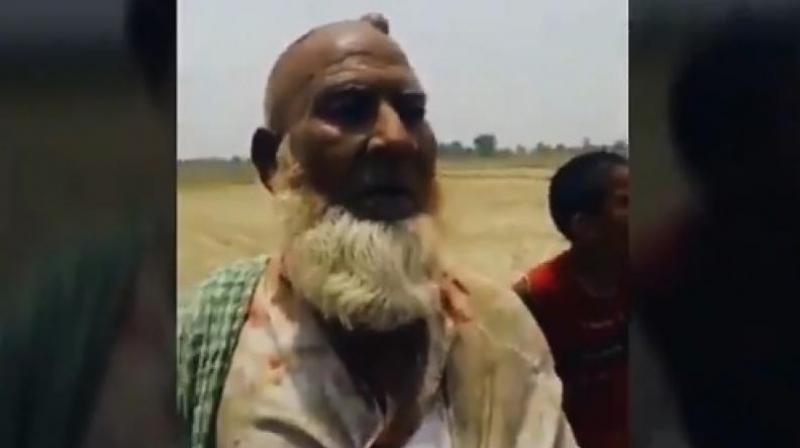 Saniyuddin was forced by the mob to say he was slaughtering a cow in their field. (Photo: Screengrab | Twitter @imMAK02)

Hapur: A second video of mob lynching in Western Uttar Pradesh’s Hapur has surfaced on social media where a 45-year-old man was beaten to death and his 65-year-old companion, seriously injured.

The second video once again points to the fact that the two Muslim men were beaten up on allegations of cow slaughtering.

In the latest video posted on social media that lasts for one minute, the mob can be seen abusing and hitting 65-year-old Samiyuddin, at times pulling his beard. Saniyuddin was forced by the mob to say he was slaughtering a cow in their field. Blood can be seen on head and clothes of Samiyuddin, who survived the assault and is in hospital while 45-year-old Qasim died of his injuries.

The attack took place on Monday, at Hapur's Pilakhuwa village, about 70 kilometres from Delhi.

The authenticity of the video cannot be confirmed. Viewer discretion advised.

Cow terrorists had attacked 2 persons in Hapur on 18 June.

This old man is Saimuddin (65yo), he was attacked along with Qasim, he is in ICU now .

Watch this Video that how Cow terrorists manhandled him .

The first video filmed around the same time showed 45-year-old Qasim lying on the ground and begging for water - the mob refuses. Qasim later died in hospital.

A photo of him being dragged in the presence of policemen has forced the head of the UP Police to apologise. The police have admitted their conduct was insensitive and said their three personnel were acting in the heat of the moment trying to get the dying man to hospital.

Also Read: UP police apologises after outrage over this photo in Hapur lynching

On Friday, families of both the victims held a press conference in Delhi, alleging attempts by the police to cover up the incident by shifting the narrative to a road rage case over right of way for motorcycles.

"I went to the hospital and asked my brother about a stain on his thumb after I noticed it, he told me that he has no memory... the police wrote something and were asking us to sign, we were reluctant and that's when they would have taken by brother's thumb impression", alleged Mehruddin, the brother of Samiyuddin.