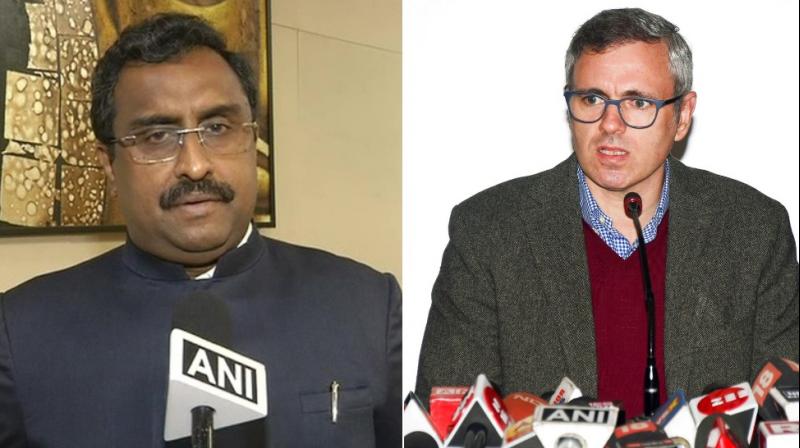 The war of words began with Ram Madhav alleging that Omar Abdullah's National Conference and Mehbooba Mufti's PDP had joined hands on instructions from 'across the border'. (Photo: ANI/ PTI)

Hours after Omar Abdullah dared Ram Madhav to prove his allegations or “be man enough to apologise” for his comment that there is Pakistani hand in alliance between his party National Conference and Mehbooba Mufti led-PDP, the BJP national secretary took back his words, however, not before taking a further dig at Omar.

The war of words began with Ram Madhav alleging that Omar Abdullah's National Conference and Mehbooba Mufti's Peoples Democratic Party (PDP) had joined hands on instructions from "across the border".

Madhav was justifying Governor Satya Pal Malik's decision to dissolve the Jammu and Kashmir Assembly after two alliances staked claim to form government in the state.

Taking back his “external pressure” comment, Madhav threw a different challenge at Omar Abdullah to contest the next polls together with the PDP.

Omar Abdullah had dared Ram Madhav to prove his allegation, saying “agencies like the Research and Analysis Wing (RAW), National Investigation Agency and Intelligence Bureau were at his command and CBI too is his parrot.”

"You come along with nothing but baseless allegations and say whatever you like with no evidence of it. If you have guts, prove it," Omar Abdullah added.

Addressing the media after his late night decision of dissolving Jammu and Kashmir Assembly, Governor Satya Pal Malik on Thursday said claimed "extensive horse-trading" was going on and it would have been impossible for parties with "opposing political ideologies" to form a stable government.

The Jammu and Kashmir Governor said that he had acted in the state's interest and according to its constitution. He dismissed allegations that he was acting on the Centre's directions and said had this been the case, their side (BJP, People's Conference) would have been called for government formation.