The announcement is expected later on Wednesday or on Thursday, sources said. 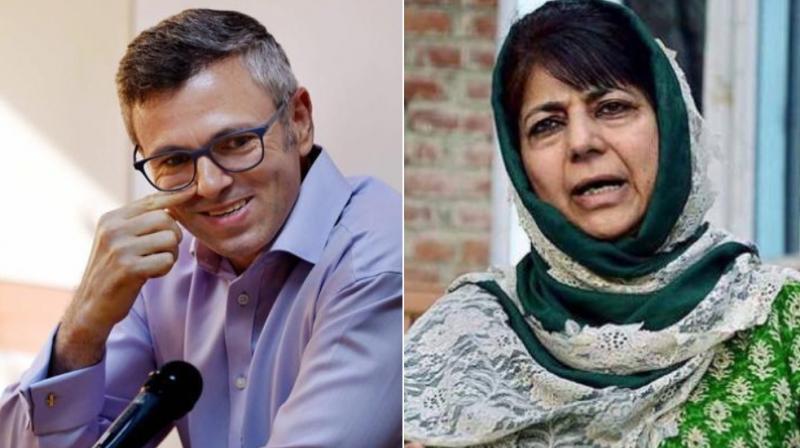 The National Conference had offered its support to the PDP after the 2014 assembly polls but the latter ignored the offer and aligned with the BJP. (Photo: PTI)

Srinagar: With the six-month period of Governor’s rule nearing its end in Jammu and Kashmir on December 19, rivals Mehbooba Mufti-led People’s Democratic Party (PDP) and Omar Abdullah’s National Conference along with Congress may team up to form government, sources indicated on Tuesday.

The announcement is expected later on Wednesday or on Thursday, sources said.

Political circles have been agog with speculation that behind the scene, efforts were underway to prop up a government headed by Sajjad Lone's People Conference, which has only two MLAs but which would be banking on support by the 25 MLAs of BJP. However, this combination would fall short of the required majority of 44 which is sought to be made by splitting the PDP which has been rocked by dissidence.

The sources said that in order to checkmate such efforts to prop up another BJP-backed government, mainstream parties such as the Congress, PDP and the National Conference are in touch to form a government.

In the 87-member Jammu and Kashmir Assembly, PDP has 28 lawmakers, Congress has 12 and the National Conference has 15, which places them well above the majority mark of 44.

A popular government headed by the PDP’s Mehbooba Mufti fell when its partner BJP pulled out of the ruling coalition on June 16.

The plan envisages a coalition between PDP and Congress, which have been partners in a government between 2002 and 2007, backed from outside by the National Conference.

The National Conference sources made it clear that they were not interested in joining a coalition government but would not be averse to giving outside support to a PDP-Congress coalition.

If such an arrangement comes about, Mehbooba Mufti is unlikely to be the chief minister but the government may be headed by a senior PDP leader.

Coming together of traditionally bitter rivals, the PDP and the NC, would mark a significant realignment of political forces in the state.

The National Conference had offered its support to the PDP after the 2014 assembly polls but the latter ignored the offer and aligned with the Bharatiya Janata Party (BJP).

After the June 16 withdrawal, Lone is understood to have been approaching disgruntled PDP leaders for forming an alliance with the BJP, the sources said.

Imran Ansari, former PDP minister, is among a few others who have been cosy with the People's Conference, which has also approached some of the MLAs for joining the alliance with the BJP.

A former separatist leader, Lone had been successful in breaking away National Conference's chief spokesman Junaid Muttu, who recently contested the urban local body elections and became Mayor of Srinagar.

Efforts made to get a response from Lone did not fructify as he did not respond to messages sent by PTI.

A founder member of PDP, Muzzafar Beigh also joined the bandwagon of Lone on Tuesday and held a press conference in Srinagar and said "the PDP betrayed the workers, denying them a chance to connect with the people, by boycotting the elections. They left a vacuum and that space has now been occupied. Politics does not wait for people who boycott."

A former member of People's Conference, Beigh said he was not averse to formation of a third front led by Lone and went on to say "Sajad Lone is like my son. I had contested the elections that led to registration of Peoples Conference as a political party. If Sajad (Lone) is interested in (formation of third front), it should be encouraged. People want something different from the beaten track".