Infiltration from PoK down by 50 percent: J&K police chief

The alertness of our forces and border management are so good that for the first time the level of infiltration has come down, he said 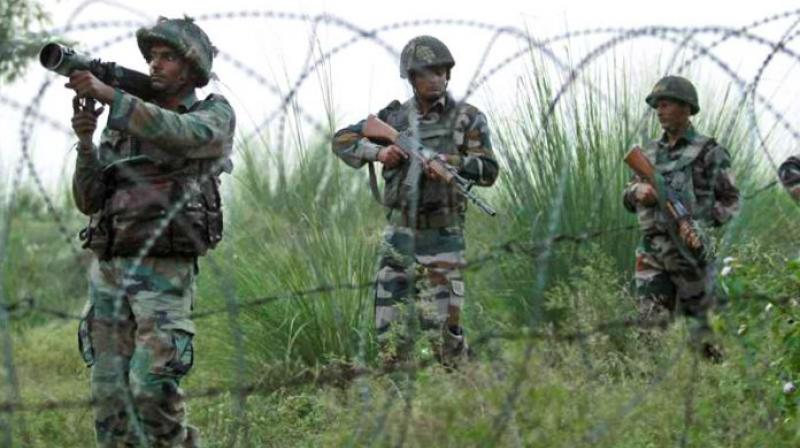 Infiltration of militants from across the border had decreased by half this year. (PTI Photo)

SRINAGAR: Jammu and Kashmir’s Director General of Police, Dilbagh Singh, on Thursday claimed that the security forces combating a three-decade old insurgency in the erstwhile state have wreaked the leadership structure of separatist militant organizations apart by killing as many 26 of their top commanders in, so far, this year.

He said that two of them-both belonging to outlawed Lashkar-e-Tayabba (LeT)- were ‘neutralised’ in the past three days along with four other militants in three separate operations.

Singh also claimed that infiltration of militants from across the border had decreased by half this year. “The alertness of our forces and border management are so good that for the first time the level of infiltration has come down by fifty percent when compared to the past. Also, the local recruitment into the militant outfits has decreased considerably. I think people, particularly our children are listening to our advice and appeals and staying away from the gun”.

Speaking to reporters in Handwara town of frontier Kupwara district, the police chief said, “We’ve succeeded in breaking the leadership structure of militants in Kashmir. Twenty-six top most commanders have been killed in encounters across the Valley, so far, this year.”

Taking about the killing of LeT commander Naseer-ud-Din Lone along with another militant in the latest gunfight with security forces that took place in Kralgund area of Handwara, the DGP said, “He was involved in the killing of six CRPF personnel in two separate terror attacks besides similar other acts including the murder of a local policeman. We had had reports that he was planning to carry out a big strike in north Kashmir after the killing of Sajad Ahmed Mir alias Sajad Hyder.” Mir, also a senior commander of the LeT, was among three militants killed in a gunfight with security forces in Kreeri area of neighbouring Bandipore district earlier this week.

The group led by Mir had on Monday killed two CRPF jawans and a local Special Police Officer in a sneak attack carried out by them in Kreeri, 38-km north of here. In the ensuing encounter which continued for about thirty hours, all the three assailants including Mir, his close associate Innayatullah and their Pakistani aide Osman and two Army jawans Grenadiers Ravi Kumar Singh and Prashant Singh were killed.

Singh said, “In last four days three encounters took place across Kashmir. In those encounters, four militants of A and A+ category were killed. Those four militants were top commanders and figured in the list of top 10 or top 20 militants operating in Kashmir”. He termed the outcome of these operations as “a big relief” for common people.

He said that Mir had lured a large number of local youth into the militants’ ranks. “In past few days, we have picked up several such youth and, thereby, taken back from the path to joining militancy. This year we have brought 16 such youth back and restored them to their families. We will continue to bring those youth, who have lost their way, towards a better path and help them to pursue a better future,” he asserted.

IGP Kashmir, Vijay Kumar, who was also present at the briefing, strongly denied the charge that the police are harassing the families of militants in the Valley. He said, “The J&K Police are working for peace and tranquility in the society so people should view our operations in that prism. Police will not harass the families of militants. In fact, we respect them,” he said.