3 police teams from Kolkata were camping in Coimbatore who traced Karnan on the basis of his mobile phone calls. 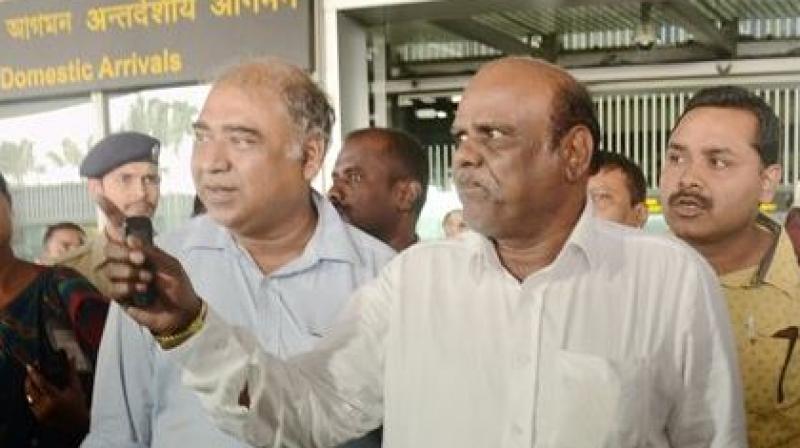 Former Calcutta High Court judge C S Karnan upon his arrival at the airport in Kolkata on Wednesday. (Photo: PTI)

Kolkata: Arrested former Calcutta High Court judge CS Karnan was taken to a state-run hospital this evening when he complained of chest pain after he was brought from Chennai and sent to the Presidency correctional home (jail) in Kolkata.

It was learnt that the 62-year-old Karnan's blood pressure was found to be quite high and doctors at the Presidency correctional home prescribed him to be taken to the state-run SSKM hospital for further check-up.

Asked whether Karnan was likely to be admitted to the hospital, the officer said it depended on the doctors who were conducting the medical check-up of the former judge.

"He is old and seems to be unwell too. We do not want to take any chance. An ECG was done on him," he said.

Earlier, a team of state CID officers brought him by an Air India flight, a senior police officer said.

Karnan, dressed in white shirt and trouser, came out of the airport escorted by policemen in civil dress. He was whisked away by the police when the reporters tried to approach him.

Tight security arrangements were made at the airport where senior police officers, including Kolkata Police Commissioner Rajeev Kumar, were present.

Karnan had been evading arrest since the May 9 Supreme Court order awarding him a six-month jail term and was arrested on Tuesday night by a team of West Bengal CID from a private resort at Malumichampatti, about six km from Coimbatore, where he was allegedly hiding for the past few days.

The former high court judge was brought to Chennai from Coimbatore by a private airline past midnight on Tuesday and later accommodated in the retiring room in the airport complex amid tight security.

Three police teams from Kolkata were camping in Coimbatore who traced Karnan on the basis of his mobile phone calls. Tamil Nadu police provided the technical support to trace his whereabouts, a senior local police officer had said.

Karnan, who earned the dubious distinction of being the first sitting high court judge to be awarded a jail term by the apex court, had retired from service on June 12 as a fugitive.

A seven-judge bench of the Supreme Court headed by Chief Justice of India J S Khehar, had sentenced him to six months imprisonment for contempt of court.