The MEA also made it clear that too much “should not be read into isolated incidents”. 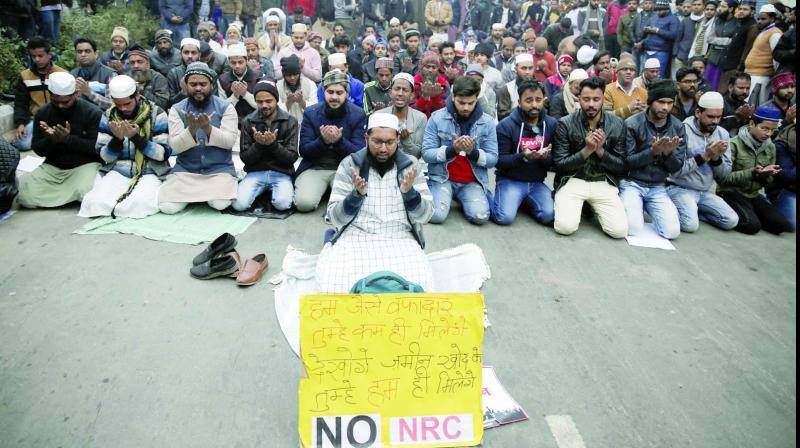 Muslim protesters pray on a road near the historic Red Fort in Old Delhi. (Photo: AP)

New Delhi: India appears to be struggling to contain the possible fallout of the Citizenship Amendment Act (CAA) controversy on ties with two extremely friendly countries —Afghanistan and Bangladesh — and seems to be in a damage-control mode on this. On Thursday, the ministry of external affairs (MEA) praised the current Afghan government led by President Ashraf Ghani, which it said had addressed the concerns of minorities in Afghanistan. New Delhi said that it had always maintained that religious persecution of minorities had taken place in Afghanistan during the earlier “Taliban” and “Mujahedin” regimes in that country.  The MEA’s statement came even as Afghan national security advisor (NSA) Hamdullah Mohib is visiting New Delhi.

On Thursday, MEA spokesperson Raveesh Kumar said, “We didn’t say that religious persecution has taken place under the current (Afghan) government. What we had said was that during the previous Mujahedin and Taliban regimes, religious minorities were deliberately victimised on the basis of religion. In 2001, the Taliban issued a call to these people to convert to Islam or leave the country. We are also aware that the current government has substantially addressed the concerns of the minorities as per their Constitutional provisions.”

Observers point out that the current Afghan government led by President Ashraf Ghani is extremely friendly to India and there are fears that the CAA controversy may cause some misunderstanding in the ties since Afghanistan is one of the countries mentioned in the CAA.

The MEA’s statement  comes in the wake of a somewhat similar one last week, when it had pointed out that in Bangladesh, the governments of Sheikh Mujibur Rehman (Bangabandhu) and (his daughter and current PM) Sheikh Hasina had protected minorities in Bangladesh and under the “previous government” there, a veiled reference to the earlier government led by Bangladesh Nationalist Party (BNP) chief Begum Khaleda Zia, which was seen to be pro-Pakistan and anti-India. Bangladesh is another country mentioned in the CAA.

On ties with Bangladesh, the MEA on Thursday said there is a close relationship between India and Bangladesh and that the close ties between the two should “not be defined by postponement of a visit”, a reference to the recent postponement of the visit (to India) of the Bangladesh foreign minister. The MEA spokesperson said there are currently over 75 dialogue mechanisms with Bangladesh. The MEA added that a meeting of the Joint Water Commission between the two countries had only been postponed because Bangladesh felt it “did not have the data from the six rivers”. The MEA also made it clear that too much “should not be read into isolated incidents”.