India   All India  20 Aug 2018  Rajiv’s neighbourhood policy was truly spectacular, this govt should emulate it
India, All India

Rajiv’s neighbourhood policy was truly spectacular, this govt should emulate it

When Rajiv Gandhi took over, the situation in Sri Lanka had been deteriorating. State violence against Tamils was on the increase. 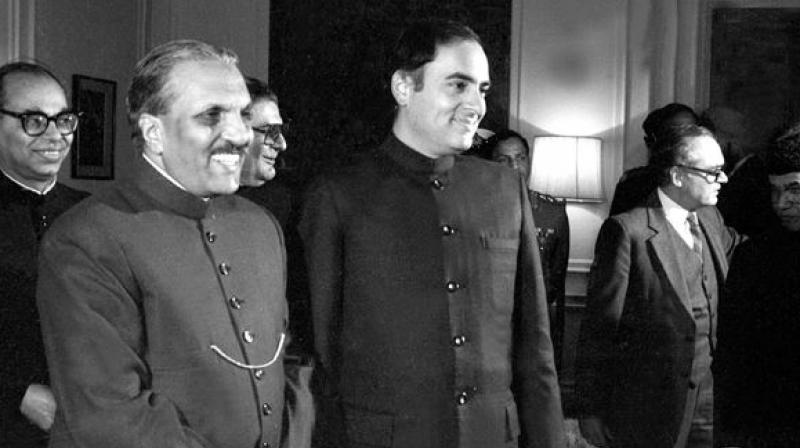 Today, as we remember former Prime Minister Rajiv Gandhi on his 74th birth anniversary, it may be worth recalling the manner in which he conducted India’s foreign policy, especially with regard to its neighbours. No nation’s foreign policy can be successful unless it is so with its immediate neighbourhood. Despite Prime Minister Narendra Modi’s trips to as many as 57 countries, India’s relations with its neighbours, in particular Pakistan, China, Sri Lanka, Nepal and the Maldives, have perhaps been never been so low. This is in sharp contrast to the mature handling and statesmanship displayed by India’s youngest-ever Prime Minister who was 24 years younger than the present incumbent when he assumed office in tragic circumstances on October 31, 1984.

Rajiv Gandhi inherited many problems, some of which were not really within India’s control, like the nuclearisation of Pakistan, the ethnic conflict in Sri Lanka and China’s militant attitude on the border. But Rajiv did not let the constraints take over his policy and made earnest efforts to get over them and succeeded in giving a new direction to India’s relations with these countries. Imran Khan has taken over as Pakistan’s new Prime Minister. The response of the Indian government has been rather lukewarm and formal. There seems to be no initiative to take advantage of the new situation that has emerged in our vicinity. Much of it may be due to the general election looming in India, which is just a few months away. But Rajiv Gandhi would have acted differently. He never wasted an opportunity that came his way in international relations, or for that matter in the domestic domain.

Rajiv’s Pakistan policy was a great success. During the rule of both Zia-ul Haq and Benazir Bhutto, he took many initiatives to improve India-Pakistan ties. With Zia, he concluded an extremely significant agreement whereby both the countries undertook not to attack each other’s nuclear installations. He also encouraged Zia’s cricket diplomacy. The Pakistani dictator made several visits to India to watch India-Pakistan matches. When democracy returned to Pakistan with the election of Benazir Bhutto, Rajiv visited the country, the first Prime Minister after Jawaharlal Nehru to do so 28 years later. He tried to start a new era in relations with Pakistan. But he was equally zealous in safeguarding India’s interests and didn’t comprise a bit in his policy of modernising the armed forces, which saw the highest-ever budgetry allocation for procuring new weapons and equipment. But there were critics too. Time magazine (April 3, 1989) ran a cover story under the title “Super India”, which showed “India was spending enormous amounts on weaponry and seemingly preparing itself for war”.  However, a defence analyst justified the military buildup and wrote: “Ever since Independence, India has dreamed of being a military power.” That indeed is the dream of any country aspiring to global status.

When Rajiv Gandhi took over, the situation in Sri Lanka had been deteriorating. State violence against Tamils was on the increase.  This was also having an adverse effect on the psysche of people in Tamil Nadu and Tamilians settled in other South Indian states. They wanted the atrocities against Sri Lanka’s Tamils stopped, and launched agitations to pressure New Delhi to take early action.  It was under these circumstances that the India-Sri Lanka Accord of August 1987 was signed.  Rajiv Gandhi believed it would safeguard the life and property of Tamils and also protect the sovereignty and territorial integrity of Sri Lanka. Though the accord came in for criticism from many quarters, it managed to achieve both its short-term and long-term objectives, even though it took many years for its full realisation.  But the cost was too high: the precious life of Rajiv Gandhi.  As Palestinian leader Yasser Arafat was to say years later: “Had fate spared our martyred friend, the history of modern India would have witnessed one of the greatest giants who ruled India or were destined to rule it.”

Under Rajiv Gandhi’s leadership, ties with China acquired a new momentum.  He visited China in December 1988, the first PM after Jawaharlal Nehru to do so. The long handshake between Deng Xiaoping and Rajiv Gandhi symbolised the new spirit in the relationship of both countries. Rajiv Gandhi displayed both dynamism and pragmatism in removing tensions between the two neighbours and worked out a new mechanism to deliberate upon the border problem. V.P. Dutt, a foreign policy expert, summed up Rajiv’s historic and highly successful visit to China: “Rajiv Gandhi held fast to three parameters in relations with China.  First, India and China should continue, extend and deepen their dialogue and exchange information and personnel in various fields and improve relations.  Second, the border issue was a central issue and must be addressed too, but it should not be the only concern of this relationship.  Third, India would not ignore acquisition of a certain measure of strength, maintaining the defence preparedness and looking after its interests.”

India went to the rescue of the Maldives in 1988 when its sovereignty and territorial integrity was in danger.  Rajiv Gandhi gave the highest priority to regional cooperation in South Asia.  He believed a number of complex problems of the countries of the region were similar and could be solved with joint efforts.  He reiterated that the Saarc countries were linked by age-old ties which could lead them to collective cooperation.  At the inauguration of the Saarc summit in Dhaka on December 7, 1985, Rajiv Gandhi said: “We of South Asia constitute one-fifth of the world’s population.  Cooperation amongst us constitutes cooperation with a vast segment of humanity… All seven of us continue to be confronted with formidable problems of poverty, illiteracy, malnutrition and disease.  We have to overcome these problems in a highly adverse external environment.  South Asian cooperation points the way to collective self-reliance.”

Unfortunately, today, thanks to the shortsighted foreign policy of the Narendra Modi government, relations between India and its neighbours are in complete disarray.  The Prime Minister can reverse the process if he emulates the example of Rajiv Gandhi, which he must if India has to regain its lost stature in Asia, and indeed the world.