India   All India  20 Jun 2019  Donald Trump's fan in Telangana observes fast for him every Friday
India, All India

Donald Trump's fan in Telangana observes fast for him every Friday

Bussa Krishna unveiled the statue on the occasion of the Trump's birthday on June 14 and performed 'Abhishek'. 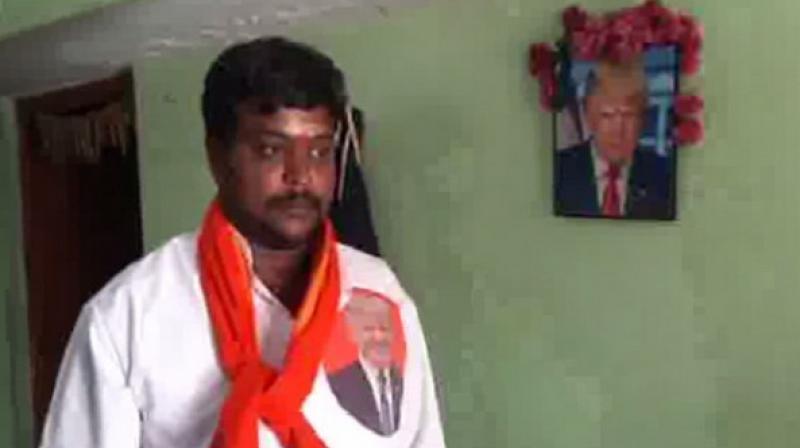 Janagam: A young man from Konnea village, who unveiled a six feet statue of the United States President Donald Trump in Telangana, on Wednesday, said that he observes a fast every Friday for the American leader.

Bussa Krishna unveiled the statue on the occasion of the Trump's birthday on June 14 and performed 'Abhishek'.

"I have installed Donald Trump's statue on his birthday and I pray to him like a God. For the first time, I saw Trump in my dream and it has repeated for the second time. The day India vs Pakistan match was held I saw him in my dream and thankfully India won the match. After this incident, I have kept Trump's picture as my display wallpaper of my mobile," he said while speaking to ANI.

Krishna said that Trump's statue cost him around Rs 1.3 lakh.

"I installed Trump's statue with my own money and it cost me around Rs 1.3 lakh. After installing his statue many people are calling me a Trump fan. I also observe fast on every Friday for Trump. I will live as Trump fan and die as Trump fan," he said.

"I thought Krishna has gone mad as he was worshipping Trump. He is continuously performing pooja for the last three years. Later, I started respecting him for his passion. He also celebrates Trumps birthday grandly," one of the villagers said.

Krishna said he was impressed by Trump for his straightforwardness.

Interestingly, Krishna's love for Trump has attracted international media as well. Many foreign media outlets have come forward to cover him in the recent past.