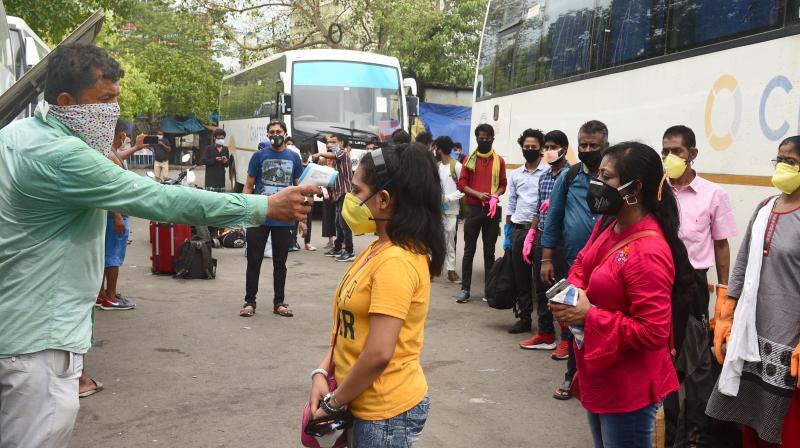 Out of 157 coronavirus cases in Assam that the state government has recorded, 114 are actives cases and under treatment. PTI Photo

Guwahati: With migrant workers returning to the state in their thousands, the number of coronavirus positive cases shot up by 42 cases on Wednesday. It was the biggest one-day spike seen in the state so far. The new cases include a two-month-old baby who had returned with its parents from outside the state. The total number of positive cases in the state has jumped to 157.

Moreover the state is grappling with another problem as on Wednesday at least three corona positive patients escaped the Sarusajai quarantine centre causing anxiety to the administration. However, police managed to apprehend all of them.

Since May 18, Assam has reported 57 COVID-19 cases. At least 40 of them had returned from outside the state and were mostly in institutional quarantine. A few were under home quarantine.

Assam's doubling rate, calculated over an average of seven days, was 10.14 days as of May 17 when the total number of cases in the state was 100. The doubling rate went down to half within two days, to 5.42 days.

Out of 157 coronavirus cases in Assam that the state government has recorded, 114 are actives cases and under treatment. 41 people have been cured and discharged from hospital, two have migrated and four have died, including two whose tests came out positive after their death. The number of cases in the state rose by nearly 57 per cent in last 48 hours.

Assam, which has done well until now in containing the spread of pandemic, is now worried with the dipping doubling rate with the migrants returning. Five trains carrying migrant workers are scheduled to enter Assam on Wednesday alone while dozens of trains are going to start from different destinations.

Meanwhile, hundreds of migrants stranded all over the country have flooded the social media with appeal for help in recuing them back to the state. Some of the people working in Haryana have also posted video messages to draw the attention of the state. Assam health minister who is in the forefront of managing the corona crisis in the state has asked the stranded people to wait for their turn to return back to the state.