India   All India  20 May 2017  'Kashmir problem' emerged because of Cong: Amit Shah
India, All India

What else Congress can say. Kashmir problem emerged because of Congress, Shah said. 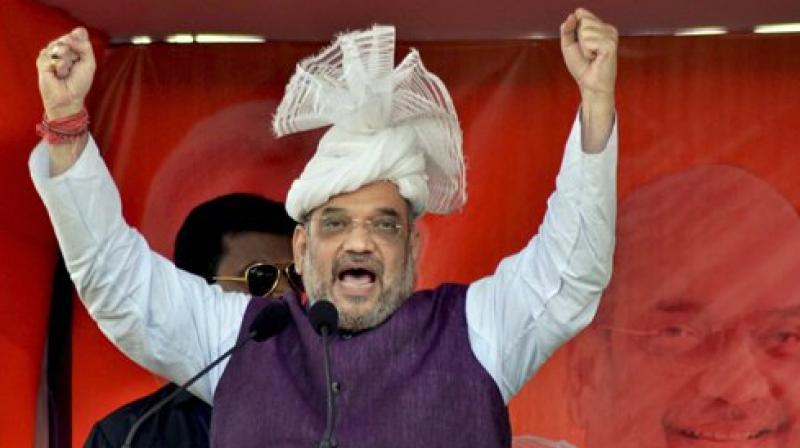 He expressed confidence that Narendra Modi led NDA government will soon control the present situation in the Valley. (Photo: PTI)

"What else can Congress say? Kashmir problem emerged because of Congress," Shah said while addressing media here on Saturday.

He was asked to respond to the Congress allegations, which had reportedly accused NDA government of failing to control the situation in Kashmir.

Concerned over the ‘disturbed’ situation in the Valley, the Congress had formulated a policy-planning group for Jammu and Kashmir on April 19, to take forward the peace initiative in the state.

The Congress has been critical of the Centre as well as the PDP-BJP coalition government over the handling of the situation in J&K since July last year.

When asked about Kashmiri students indulging in stone pelting at the security personnel, Shah said such situations had emerged in the past as well.

"Kashmir faced such situations several times since 1989 (since onset of militancy in the state). It is not for the first time that such a situation had erupted and these

situations were controlled. Whenever security agencies adopted a tough stand, such situations arose. I am confident that this situation will soon be controlled," he said.

Praising the three-year old regime of Modi government at the Centre, he said the NDA government has worked for the upliftment of poor, downtrodden, labourers and farmers.

He said the present government at the Centre has taken a bold step like demonetisation to contain spread of black money to a large extent and boost country's economy.

Welcoming the International Court of Justice (ICJ) order, which stayed the execution of former Naval officer Kulbhushan Jadhav, he termed it as ‘a very big achievement’ for the government.

Earlier, a large number of BJP workers and supporters accorded a grand welcome to Amit Shah at the airport here this morning and organised a roadshow, while escorting him to the party office in the city.

Shah is travelling across states to strategise and find ways to strengthen the party at the grass-root level.

"Chandigarh is the fourth place on Shah's itinerary for the 95-day tour which began with his visit to Jammu on April 29. The BJP chief has also visited Himachal Pradesh and Tripura," Tandon said.