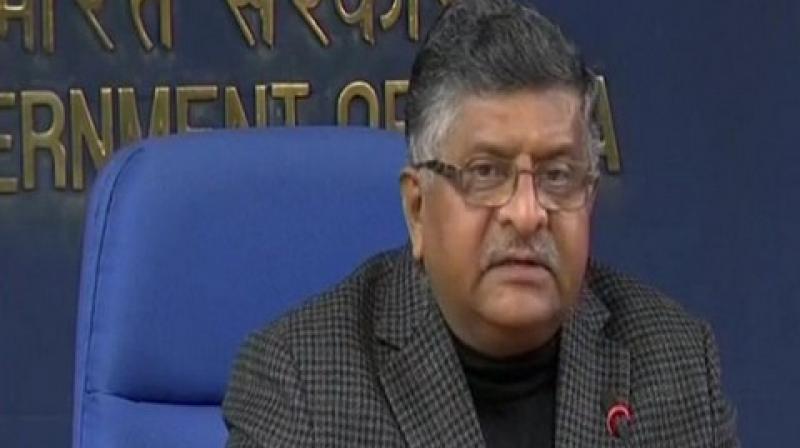 "If the economy is 7.4 per cent plus, if national highways are being constructed, if manufacturing is picking up, and if India's economy is globally being recognised, it is creating more and more jobs," Ravi Shankar Prasad said. (Photo: File | ANI)

New Delhi: Information Technology Minister Ravi Shankar Prasad on Wednesday said the IT sector has created 8.73 lakh new jobs in the past five years, as he accused the Congress of spreading blatant "falsehood" on the employment data.

"Congress is indulging in falsehoods...They have nothing to offer from their own side...I speak based on our performance not rhetoric, on facts not falsehoods," Prasad told reporters here. Citing the data by apex industry body Nasscom, he said the IT sector has spawned 8.73 lakh jobs in the past five years under Prime Minister Narendra Modi-led government and currently provides employment to 41.40 lakh persons directly and 1.2 crore persons indirectly.

"I am not using my data, I am giving Nasscom data," he said. Confronting the Opposition over the jobs crisis barb, the minister challenged the Congress to show just how many jobs had been generated in their tenure. "One can talk on facts but not on falsehoods, and if the Congress party is so keen, can they show their record of employment generated in 10 years of UPA when the economy was down and India was a big centre of impropriety and corruption," Prasad said.

He said the spurt in economic activities and infrastructure projects over the past few years had created a number of jobs. "If the economy is 7.4 per cent plus, if national highways are being constructed, if manufacturing is picking up, and if India's economy is globally being recognised, it is creating more and more jobs," Prasad said.