India   All India  19 Feb 2021  US omits mention of China in its statement after Quad virtual meet
India, All India 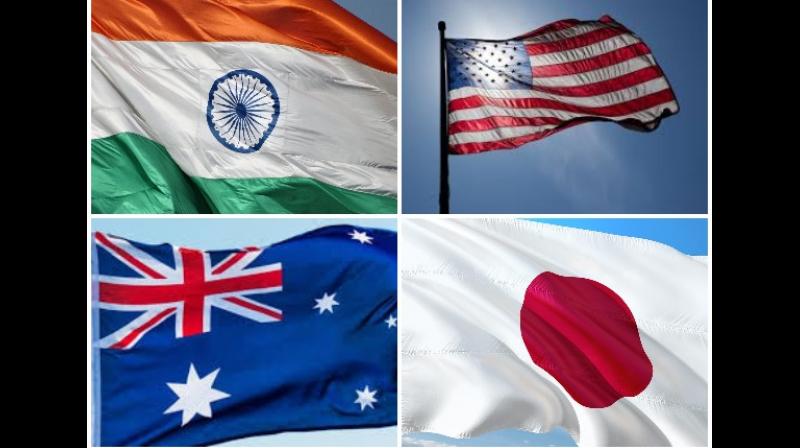 The four Quad nations “emphasised the commitment to upholding a rules-based international order underpinned by respect for territorial integrity and sovereignty. — ANI

New Delhi: In a sharp and glaring contrast to the earlier Trump administration, the United States under the new Joe Biden presidency on Thursday publicly omitted any criticism or even mention of China in its statement after the foreign ministers of the four Quad nations -- the United States, Japan, Australia and India -- held their third meeting in a virtual format on Thursday.

It may be recalled that after the previous physical Quad meeting in Tokyo in October, then US secretary of state Mike Pompeo had blasted China publicly for “exploitation, corruption, and coercion” in the “South (China Sea) , East China Sea, the Mekong, the Himalayas and the Taiwan Straits”. But a statement issued late Thursday evening by the US state department on the Quad meeting made no mention of China. The Quad is an arrangement that aims to preserve a “rules-based order” in the Indo-Pacific region.

Instead, the US state department said that the four ministers “discussed countering disinformation, counterterrorism, maritime security, the urgent need to restore the democratically elected government in Burma (Myanmar) and the priority of strengthening democratic resilience in the broader region”.

New Delhi, meanwhile, said in a separate statement that the recent developments in Myanmar (where a military coup took place earlier this month) was discussed at the meeting, with India reiterating the “upholding of rule of law and the democratic transition”.

The meeting was attended by US secretary of state Antony Blinken, external affairs minister S. Jaishankar, Australian foreign minister Marise Payne and Japanese foreign Minister Toshimitsu Motegi, where a “productive exchange of views on regional issues” took place, New Delhi said. The four Quad nations “emphasised the commitment to upholding a rules-based international order underpinned by respect for territorial integrity and sovereignty, rule of law, transparency, freedom of navigation in international seas and peaceful resolution of disputes”, the New Delhi statement added, in what is seen by observers as the usual veiled indication towards China.

Highlighting their “shared attributes as political democracies, market economies and pluralistic societies”,  the four Quad nations “reiterated their common vision for a free, open and inclusive Indo-Pacific region, with clear support for Asean cohesion and centrality” and “noted that the Indo-Pacific concept gathered growing international support, including in Europe”, New Delhi added.

The US state department said: “The ministers discussed Quadrilateral cooperation on the Covid-19 response and recovery and climate change and committed to working together to address these global challenges… The participants reaffirmed their mutual support for Asean centrality.  They reiterated their commitment to the Quad meeting at least annually at the ministerial level and on a regular basis at senior and working levels to strengthen cooperation on advancing a free and open Indo-Pacific region, including support for freedom of navigation and territorial integrity.”

In its statement, the MEA sai:, “The ministers ... recognised that the changes underway in the world makes a strong case for their countries working closely together. It was important for the international community that the direction of changes remains positive and beneficial to all … The ministers discussed ongoing efforts to combat the Covid-19 pandemic, including vaccination programmes. They expressed their commitment to cooperate in addressing this challenge, enhancing access to affordable vaccines, medicines and medical equipment. India’s efforts at providing vaccines to 74 countries was recognised and appreciated.”