India has criticised Pak for turning a blind eye towards the evidence available against Mumbai attack mastermind Hafiz Saeed. 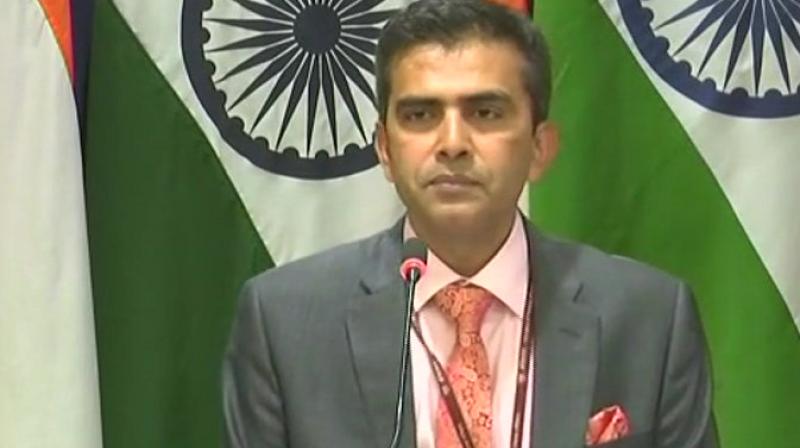 India has, time and again, protested against Pakistan for harbouring Saeed, who is wanted for plotting the 2008 Mumbai attack. (Photo: ANI)

Ministry of External Affairs (MEA) Spokesperson Raveesh Kumar on Friday said, "If somebody is a designated global terrorist, it's done based on a lot of evidence available in public domain. You can close your eyes, pretend nothing happened but they (Pakistan) have to realise what's in front of them and take action against such people, who are freely operating from their soil."

Pakistan Prime Minister Shahid Khaqan Abbasi, in a recent interview to Geo TV, had said that there was no case registered against Saeed in Islamabad and without it, action cannot be initiated against him.

Dismissing Abbasi's remarks on Mumbai attacks mastermind, the United States made it clear that he should be prosecuted to the fullest extent of the law.

At a press briefing, US State Department Spokesperson Heather Nauert on Thursday said, "So we've certainly seen the reports about this, that the Pakistani Government has said that no case has been registered against this individual, Hafiz Saeed."

She added, "Many of you may recall we talked about this a couple of weeks ago, about who this individual is. We regard him as a terrorist, a part of a foreign terrorist organisation. He was the mastermind, we believe, of the 2008 Mumbai attacks which killed many people, including Americans as well."

Saeed was released from house arrest after a Pakistani court cited lack of evidence against him in the 26/11 Mumbai attack case.

India has, time and again, protested against Pakistan for harbouring Saeed, who is wanted for plotting the 2008 attack.