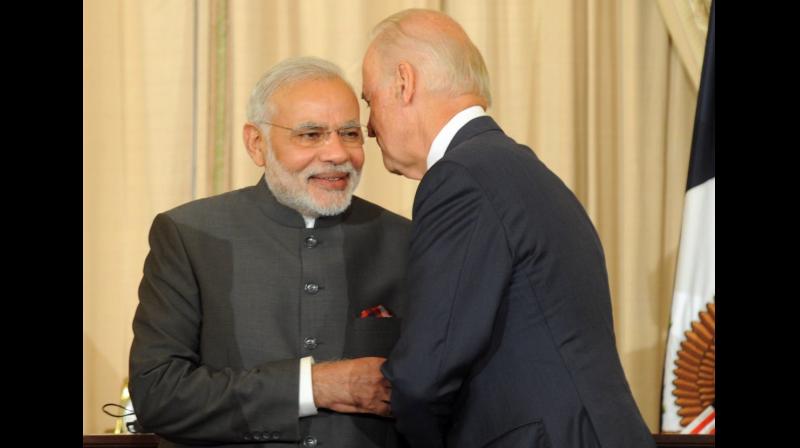 New Delhi: Prime Minister Narendra Modi spoke with US President-elect Joe Biden on Tuesday, as the two leaders discussed the COVID-19 pandemic, climate change and cooperation in the Indo-Pacific region, while reiterating their firm commitment to the strategic bilateral partnership.

This was the first interaction between the two leaders after Democrat Biden defeated incumbent president Donald Trump in the US presidential election.

"Spoke to US President-elect Joe Biden on phone to congratulate him. We reiterated our firm commitment to the Indo-US strategic partnership and discussed our shared priorities and concerns -- COVID-19 pandemic, climate change, and cooperation in the Indo-Pacific Region," Modi said in a tweet.

The prime minister also conveyed his congratulations to US Vice President-elect Kamala Harris.

"Her success is a matter of great pride and inspiration for members of the vibrant Indian-American community, who are a tremendous source of strength for Indo-US relations," he said.

Modi congratulated Biden on his election, describing it as a testament to the strength and resilience of democratic traditions in the United States, the Prime Minister's Office (PMO) said in a statement.

The prime minister warmly recalled his earlier interactions with Biden, including during his official visits to the US in 2014 and 2016, it said.

Biden had chaired the Joint Session of the US Congress that was addressed by Modi during his 2016 visit to the United States, the PMO said.

They also discussed their priorities, including containing the COVID-19 pandemic, promoting access to affordable vaccines, tackling climate change and cooperation in the Indo-Pacific Region, the PMO said.

The interaction between the two leaders came on a day External Affairs Minister S Jaishankar exuded confidence that the ties between India and the US will expand further under Biden's administration, noting that the US president-elect was part of the period when the bilateral relations underwent a radical transformation.

Biden is known to be a strong proponent of closer India-US ties since his days as a senator in the 1970s and played a key role in getting the approval of the Senate for the bilateral civil nuclear deal in 2008.

In the midst of hectic negotiations between the two countries to conclude the civil nuclear deal, Biden was a critical ally of India in the Senate.

The deal had laid a strong foundation for the deepening of ties between the two leading democracies of the world.

The strategic and defence ties between India and the US witnessed major expansion during Barack Obama's presidency and Biden, as the vice president, had played a key role in it.

In his campaign documents, Biden spoke about his vision for the US-India partnership as well as on standing with India in facing threats in the region.