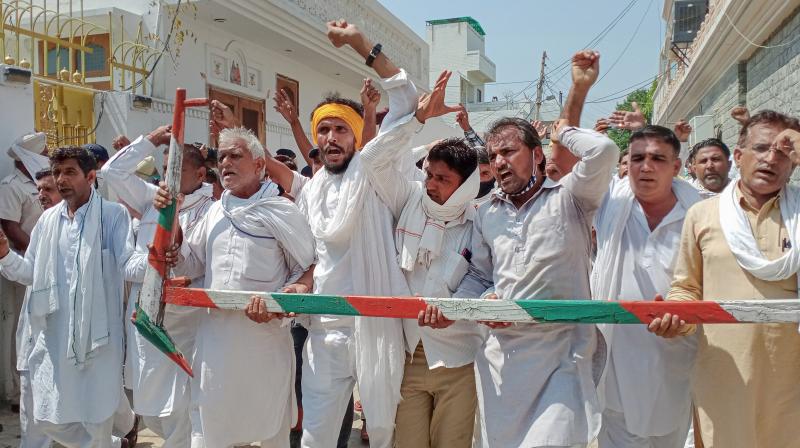 Hisar: Farmers stage a protest over their various demands, in front of Mini Secretariat in Hisar district, Wednesday, Sept. 16, 2020. (PTI)

The Lok Sabha on Thursday passed the Farmers Produce Trade and Commerce (Promotion and Facilitation) Bill and the Farmers (Empowerment and Protection) Agreement on Price Assurance and Farm Services Bill. It has already passed Essential Commodities (Amendment) Bill.

The three bills will now be tabled in Rajya Sabha and become laws after the Upper House also passes them. They will replace ordinances promulgated by the Union government.

The two bills were passed by voice vote in Lok Sabha earlier in the evening amid protests by Opposition parties, with Shiromani Akali Dal chief Sukhbir Singh Badal also vehemently opposing them, calling these measures as anti-farmers. The SAD's lone member in the Union Cabinet, Harsimrat Kaur Badal, also quit the government, accusing it of not taking farmers on board.

Hailing the passage of three farm sector bills in Lok Sabha, Prime Minister Narendra Modi described these proposed legislations as historic and asserted that they will rid farmers and the farm sector of middlemen and other bottlenecks.

In a subtle dig at the Opposition, Modi claimed that many forces were trying to "mislead" farmers and assured the farming community that minimum support price (MSP) and government procurement of their produce will continue along with a lot of new opportunities for them.

It is to be noted that farmers in Haryana and Punjab, two of India's biggest agriculture hubs, have been opposing the Bill, claiming that the latest amendments will encourage hoarding by big farmers but marginalise smaller players.

Farmers protesting against the newly-passed Bills have also noted that they are only likely to enhance the corporatisation of the agriculture sector, leading to reduction of farmers' bargaining power and crippling them financially.