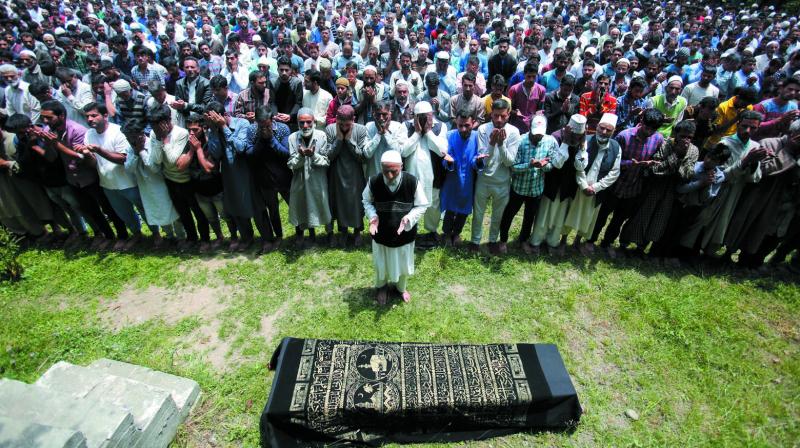 Villagers offer prayers near the coffin of slain cop Tasveer Ahmad during his funeral at Surasyar village in Srinagar. (Photo: PTI)

Srinagar: The security forces on Saturday enforced a security lock down in parts of Jammu and Kashmir’s summer capital, Srinagar, as tensions were running high in the aftermath of fourteen deaths in recent violence. Among the slain were eight policemen shot dead by militants in three separate attacks, three Lashkar-e-Taiba (LeT) militants and an equal number of civilians.

LeT’s commander for Anantnag, Junaid Matto, along with two associates Nasir Wani and Adil Mushtaq Mir, was killed in a daylong encounter in the Aarwani area on Friday. The militants’ bodies were retrieved from beneath the smouldering debris of the two residential houses blown up by the forces in their final assault against the holed up militants.

The authorities termed Matto’s killing a “major success” against the militants particularly the LeT. “He was a notorious militant involved in a number of terror activities, including the killing of policemen,” a police spokesman said. Two civilians Muham-mad Ashraf and Ehsan Ahmed were also killed in Arwani when the forces opened fire to quell violent mobs, which relocated to the encounter site and tried to hamper the operation to help the militants. The police said while the encounter was on “an unruly mob instigated by the militants started pelting stones with an intention to disturb the operation and give chance to the holed-up militants to escape.”

The same evening, a group of heavily armed militants targeted a police party while it was passing through Thajiwara, Acchawal area of Anantnag. Five policemen, including a sub-inspector, Feroz Ahmed Dar, a station house officer, and their driver were killed.

J&K’s DGP Shesh Paul Vaid said it was a revenge act. “We will track down the attackers,” he said. Defence minister Arun Jaitley termed the policemen’s killing as “an act of cowardice”. He tweeted, “Killing of six policemen in #Achabal is a cowardice act. My condolences to the bereaved families. Salute to martyrs”.