The doors of Sabarimala temple will be opened to women for the time at 5 pm today. 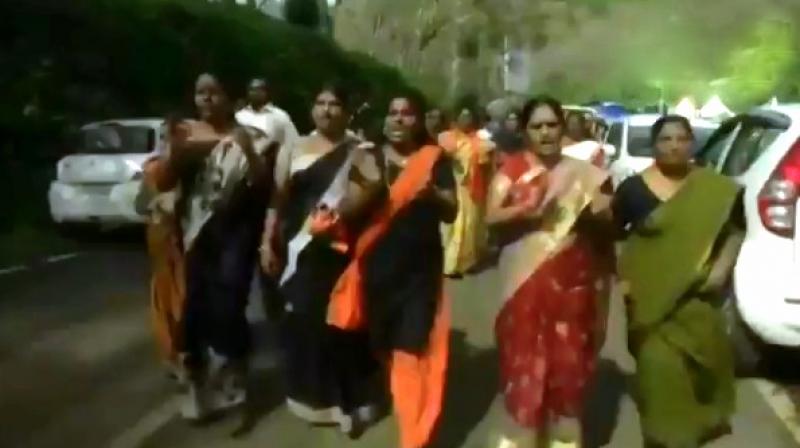 Slogans were raised as women marched in protest at Nilakkal, the main gateway to Sabarimala. (Screengrab | ANI)

Kochi: Hours ahead of Sabarimala temple opening its doors to women of all ages in the renowned shrine in Kerala, protesters, mostly women, took to streets agitating against the Supreme Court's last month verdict.

Slogans were raised as women marched in protest at Nilakkal, the main gateway to Sabarimala.

The doors of Sabarimala temple will be opened to women for the time at 5 pm today.

#WATCH: Women protest in Nilakkal against the entry of women in the age group of 10-50 to #Sabarimala temple. #Kerala pic.twitter.com/GuxDZo0R7G

Pilgrims have started arriving at Nilakkal.

Also Read: Historic day: Doors of Sabarimala temple to open for women of all ages today

Meanwhile, 7 protesters have been arrested for creating ruckus. Police said that every devotee will have straight passage to Sabarimala. Protesters will not be allowed to gather at the base, they added.