The trek to the Lord Ayyappa Shrine began at 3 pm and the entry to the doors of the Sabarimala temple at 5 pm. 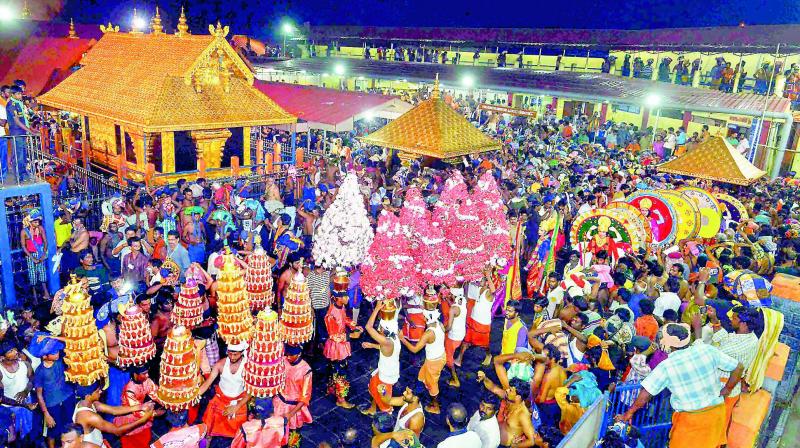 The Kerala police ordered that anyone trying to obstruct entry will amount to criminal conspiracy. (Photo: File | PTI)

Kochi: After the historic Supreme Court ruling last month revoking ban on women of all ages to enter the Sabarimala temple, the renowned shrine in Kerala opened its doors to women for the first time at 5 pm today.

The apex court’s verdict had, however, received mixed responses with scores of protesters taking to the streets of Kerala demanding an overturn in the ruling citing that it is against their traditional beliefs.

In Thiruvananthapuram, the meeting between Travancore Devaswom Board and the pro-tradition group comprising tantris and Pandalam ex-royals on Wednesday to find a via media solution fizzled out over whether the board would prefer a review petition before the Supreme Court.

Devotees, both men and women stopped vehicles and evicted young women they thought were headed for the hill shrine.

Around 1,000 police personnel, 800 men and 200 women, have been deployed in Nilakkal, the main gateway to Sabarimala, to ensure a safe passage to the pilgrims to the Lord Ayyappa temple.

The Kerala police ordered that anyone trying to obstruct entry will amount to criminal conspiracy.

Chief Minister Pinarayi Vijayan had, in a press meet on Tuesday, said that government will not submit a review petition and that they will ensure facilities to allow all devotees to go to Sabarimala shrine today. 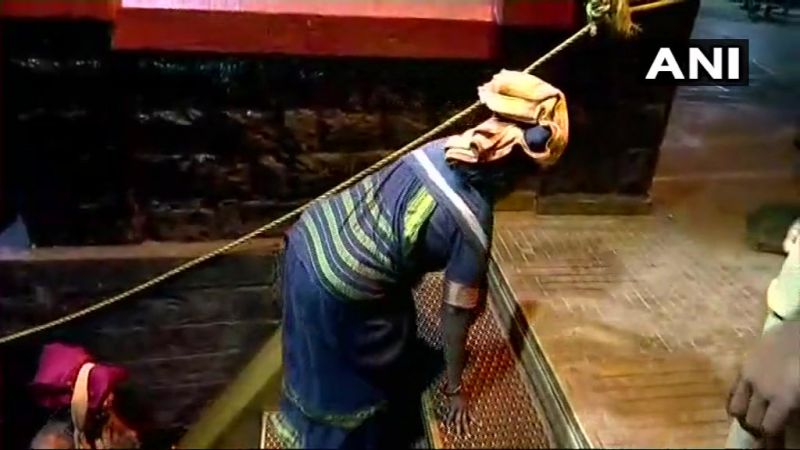 06:42 pm: Section 144 (prohibits assembly of more than 4 people in an area) has been imposed in Pampa, Nilakkal, Sannidhanam and Elavungal.

06:26 pm: Prayers offered at Sabarimala Temple after its portals opened at 5 pm.

#WATCH: Prayers being offered at #SabarimalaTemple after its portals opened at 5 pm; devotees can offer prayers till 10.30 pm today. #Kerala pic.twitter.com/rBuneRDatN

05:18 pm: Congress is not attacking anybody and definitely attack on journalists is not tolerable. Those who are protesting there are BJP and RSS people. Nowhere Congress people are engaged in this kind of hooliganism or vandalism: Ramesh Chennithala, Congress

04:40 pm: ANI reporter Ayushmaan Kumar was attacked by protesters at Nilakkal base camp when he was taking the pictures of women checking the buses for women devotees. Police was also present at the spot when the attack took place.

04:34 pm: Network of Women in Media, India (NWMI) vehemently denounces attacks on journalists, including several women journalists, at Nilakkal/Sabarimala. It demands that the chief minister and Kerala government take immediate action against agitators who let violent assailants loose on journalists.

“It is incumbent on the government to create a secure environment for journalists to report from Pamba and nearby areas on an issue that is of interest and concern to the public. Government must immediately ensure the safety of journalists and assure media that lives of reporters are not in danger” NWMI said.

04:29 pm: LDF govt is fully responsible for any law and order situation in the state. It's a very unfortunate situation, we aren't responsible. No BJP worker is involved, we're condemning that attempt: MS Kumar, BJP

04:14 pm: India Today journalist Mausami Singh and its crew were also attacked by the protesters at Nilakkal base camp.

#WATCH: India Today journalist Mausami Singh and its crew in a police vehicle. They were attacked by the protesters at Nilakkal base camp. #SabarimalaTemple #Kerala pic.twitter.com/R7rsSBK8fx

04:10 pm: Activist Rahul Easwar has been arrested by from Nilakkal base camp and a non-bailable FIR has been registered against him. He is kept at Pamba police station. Easwar told news agency ANI, “I didn't hit any woman there. I was moving to the other direction. It's a vendetta against me.”

04:04 pm: Police lathi-charge and pelt stones at the protesters gathered at Nilakkal base camp, in Kerala.

#WATCH: Police lathi-charge and pelt stones at the protesters gathered at Nilakkal base camp, in Kerala. #SabarimalaTemple pic.twitter.com/DMC1ePz0l2

03:57 pm: National Commission for Women (NCW) takes cognisance of the attack on women journalists. A meeting is underway at NCW office for further steps to be taken.

03:29 pm: "I can predict what is going on there, I think it is intentional. It's dirty politics they (protesters) are playing. We can't say if they are actual devotees. Supreme Court's order is Constitutional and the government is bound to implement it", says KK Shailja Teacher.

03:00 pm: Women journalists -- one from The News Minute and the other from Republic TV -- were attacked by anti-women protesters when they had gone to cover the agitations near Sabarimala temple. Protesters blocked and attacked Republic TV journalist Pooja Prasanna's car in Pathanamthitta.

01:51 pm: “RSS and BJP are taking double standards. On one hand, 5 advocates associated with the BJP gave petition in the apex court over entry of women of all ages in Sabarimala temple and on the other BJP is leading fight against the verdict. Now BJP trying to make it a law and order issue”, says Kerala minister VS Sunil.

01:41 pm: A total of 30 people have been arrested in Pamba, 9 on Tuesday and 21 on Wednesday, in connection with protests against entry of women in age group 10-50 to Sabarimala temple. Two of them have got bail.

01:16 pm: 50 people have been taken into custody in Pathanamthitta district for protesting against entry of women of all ages to Sabarimala temple.

01:03 pm: Over 20 people including former Travancore Devaswom Board president Prayar Gopalakrishnan were taken into custody in Nilakkal and Pamba for protesting against entry of women in age group 10 to 50 to Sabarimala temple.

12:50 pm: Congress party leaders hold a peaceful protest in Nilakkal against the entry of women of all ages to Sabarimala temple.

12:15 pm: Two women devotees on their way to Sabarimala temple turned away by protesters.

11:49 am: Police detain people protesting in Pamba against the entry of women of all ages in Sabarimala temple.

11:30 am: According to reports, stones were pelted at a vehicle carrying women devotees in Nilakkal, Nobody was injured in the incident. Stones were pelted when protesters insisted on searching the vehicle but the police refused. In retaliation, they pelted stones and shattered the windshield of the vehicle.

11:00 am: Women protest in Nilakkal against the entry of women in the age group of 10-50 to Sabarimala temple.

09:59 am: Protests being held near Pamba base camp against entry of women in the age group 10-50 to Sabarimala temple.

Kerala: Protests being held near Pamba base camp against entry of women in the age group 10-50 to #SabarimalaTemple pic.twitter.com/JTZ2negQ5L

09:20 am: Pilgrims begin arriving at Nilakkal, the base camp of Sabarimala Temple as the portals of the temple are all set to open today. 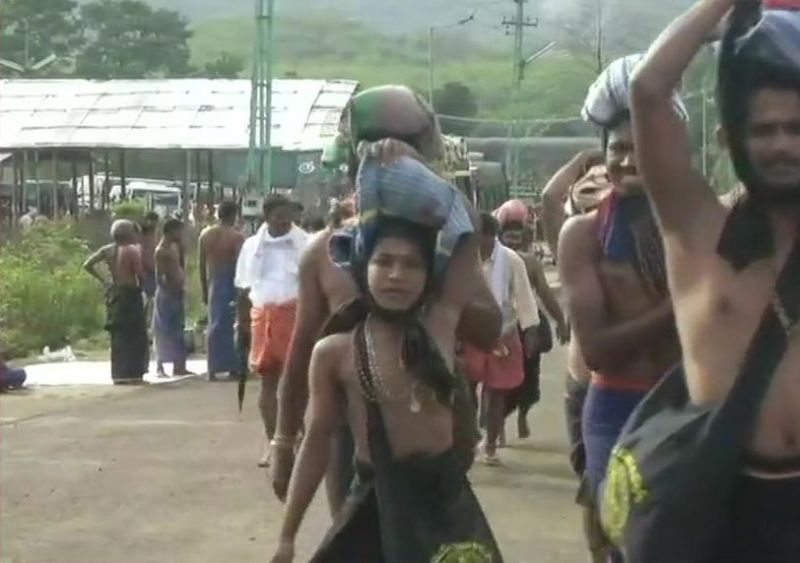 08:45 am: Seven protesters were arrested for creating ruckus. Police said that every devotee will have straight passage to Sabarimala. Protesters will not be allowed to gather at the base, they added.

08:16 am: As hundreds of additional police have been put on high alert across the state, police spokesperson Pramod Kumar told news agency AFP that, "Things are under control, and we are closely monitoring the situation". 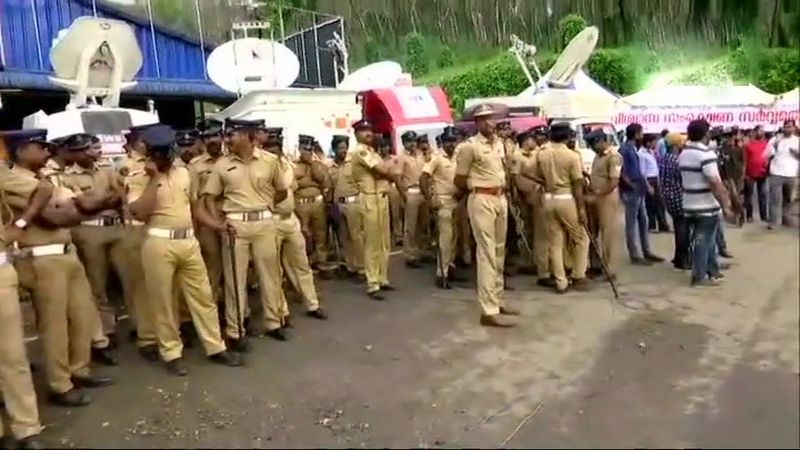 07:55 am: Devotees of Lord Ayyappa who have gathered at Nilakkal said, "We are facing problems as administration is not giving clear answers on when doors will open." 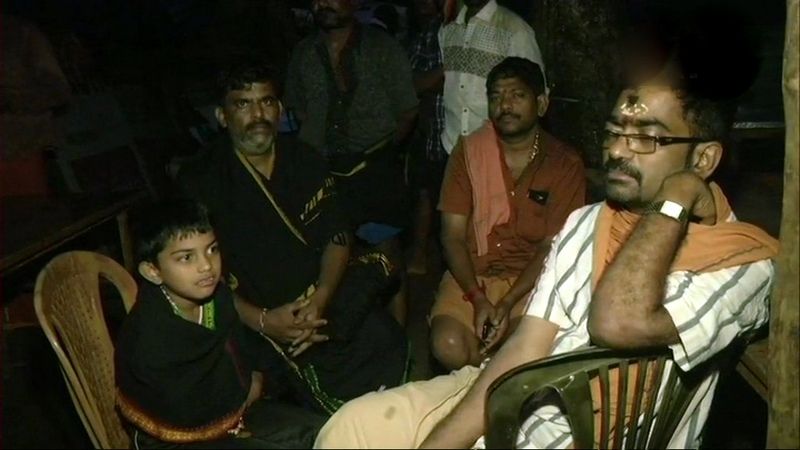 07:35 am: The trek to the Lord Ayyappa Shrine to begin at 3 pm and the entry to the doors of the Sabarimala temple at 5 pm.

07:30 am: After the Supreme Court verdict lifting ban on entry of women in menstruating age in Sabarimala temple, many had strongly opposed it. Addressing the protesters in Kollam on Friday, Malayalam actor Kollam Thulasi had allegedly said, "Women in the restricted age group who visit the Lord Ayappa Temple should be ripped apart."

07:27 am: Devotees block cars and buses to check for women travelling to Sabarimala. Few women were evicted from the bus and were asked to go back near Nilakkal in Sabarimala ahead of its scheduled opening for women of all ages for the first time today. 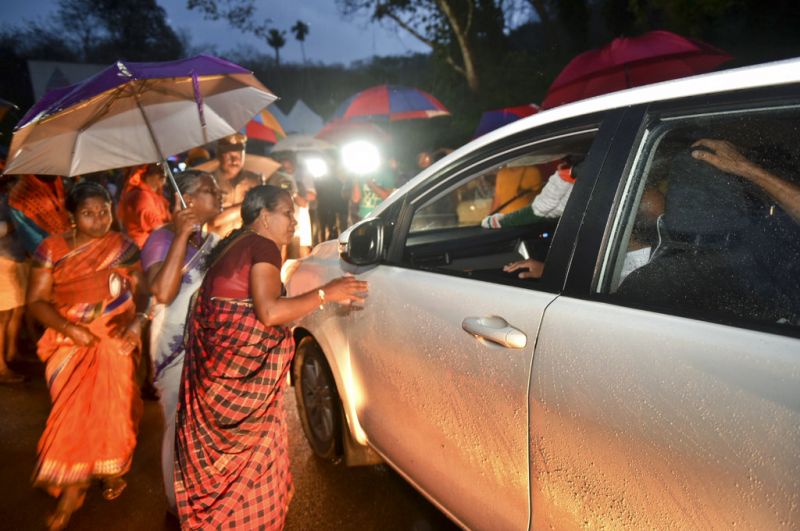 07:25 am: The Lord Ayyappa temple has traditionally barred women of menstruating age as the deity is a celibate and does not want the presence of women in the age group of 10 to 50 years. The Sabarimala temple's rule followed the belief that menstruating women are "impure".

The custom in the temple was challenged by a clutch of petitioners who argued that women cannot be denied the constitutional right to worship.