In the evening, Gen. Naravane who is on a two-day visit of the Valley met J-K Lieutenant Governor, Manoj Sinha, at the Raj Bhavan 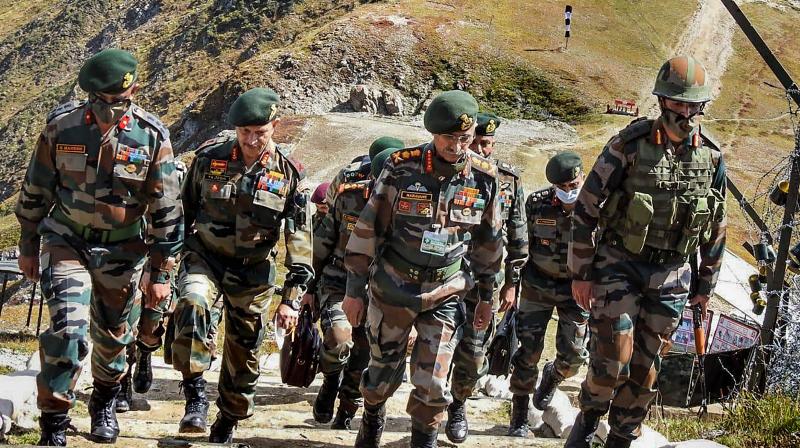 General MM Naravane, Chief of Army Staff (COAS) on a two-day visit to Kashmir, Thursday, Sept. 17, 2020. COAS arrived in Srinagar today and proceeded to undertake a firsthand assessment of the situation along the Line of Control (LC) in North Kashmir. (PTI Photo)

SRINAGAR: Indian Army chief, General Manoj Mukund Naravane, on Thursday held a series of meetings with local Army officers to review the security situation in the Valley. He also flew to a couple of locations along the Line of Control (LoC) for a firsthand assessment of the security prevailing in the frontier region.

In the evening, Gen. Naravane who is on a two-day visit of the Valley met J-K Lieutenant Governor, Manoj Sinha, at the Raj Bhavan to discuss several important issues related to effective management of internal and external security, particularly in the context of attempts at infiltration and the steps required to be taken for more effectively dealing with terrorist activities.

According to defence spokesman, Colonel Rajesh Kalia, Gen. Naravane, during his interaction with the soldiers deployed in high altitude areas of the Valley, appreciated their high morale and complimented them on their response to Pakistan ceasefire violations.

“He also commended use of technology to ensure effective day and night surveillance across the LoC which has resulted in many successful operations to foil infiltration bids from POJK in the recent past. The Army chief reinforced the need to extend all possible support to civilians residing in the border areas who are victims of targeted ceasefire violations by Pakistan Army and are facing hardships due to the pandemic,” the spokesman said.

He said at his meetings with the Army commanders and jawans deployed in the hinterland, Gen. Naravane reiterated that it was the “dawn of a new era of development, peace and prosperity in Kashmir” and applauded them for their high level of morale and contribution to peace building in J-K.