India   All India  17 Jul 2020  India in touch with UAE in gold smuggling case
India, All India

India in touch with UAE in gold smuggling case 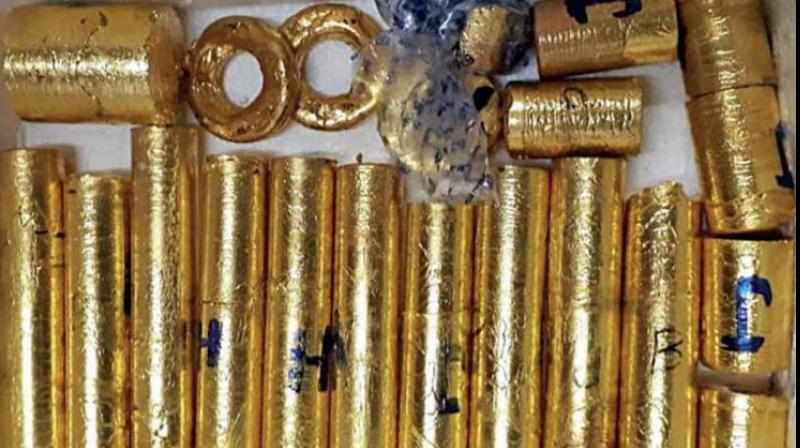 The UAE Mission has extended all cooperation to the Customs Authorities in gold smuggling racket and examining the said consignment. (Photo- Twitter)

New Delhi: Amid media reports claiming that a senior diplomat posted at the United Arab Emirates (UAE) consulate in Kerala’s Capital Thiruvanathapuram---who was being suspected of alleged involvement in a sensational gold-smuggling racket unearthed---had left India, New Delhi on Thursday said it was “in touch with the UAE ” on investigations in the matter.

There have been recent media reports of numerous phone calls allegedly between the one of the main accused in the case and the concerned senior UAE diplomat. According to certain media reports, the senior UAE diplomat---enjoying diplomatic immunity---who was based in Thiruvananthapuram has now returned home to Dubai. The issue is also being seen as sensitive since India enjoys excellent diplomatic relations with the UAE.

It may be recalled that India had last week said its Customs Authorities had “seized a consignment sent from abroad in the name of an official working in the Consulate of the UAE in Thiruvananthapuram” and that the Ministry of External Affairs (MEA) had informed the the UAE of the matter which is “under further investigation”.

The MEA had last week said, “The Customs Authorities, following established protocol and procedure, have seized a consignment sent from abroad in the name of an official working in the Consulate General of the United Arab Emirates in Thiruvananthapuram. The Ministry of External Affairs had kept the Embassy of the UAE informed regarding the matter. The UAE Mission has extended all cooperation to the Customs Authorities in examining the said consignment. The matter is under further investigation.”

The UAE had also last week claimed neither its consulate in Kerala nor any of its diplomatic staff were involved in the gold smuggling racket uncovered in the State, asserting that a former sacked employee of its Consulate in Thiruvanthapuram was responsible for this and had exploited his knowledge of the “Mission's channels” to indulge in criminal activity.

The UAE Embassy in New Delhi had been quoted by reports last week as saying, “The embassy of the UAE in India utterly condemns the attempted misuse of diplomatic channels by an individual engaged in smuggling activity. The Embassy firmly rejects such acts and uniequivocally affirms that the mission and its diplomatic staff had no role in this matter.”

The UAE had also been quoted as stating, “Initial inquiries conducted by the mission revealed that a former locally hired employee of the UAE consulate in Thiruvananthapuram was responsible for this Act. The employee in question was fired for misconduct long preceding this incident. At this time, it appears that this individual exploited his knowledge of the mission's channels to engage in criminal activity.”

The Gulf nation had added, “The UAE looks forward to fully cooperating with Indian Customs authorities to thoroughly investigate this matter and urges stringent legal action against those involved.”