India   All India  17 May 2017  Will Kulbhushan Jadhav be hanged in Pak? ICJ to pronounce verdict tomorrow
India, All India

Will Kulbhushan Jadhav be hanged in Pak? ICJ to pronounce verdict tomorrow

Jadhav, a former naval officer, has been sentenced to death after being convicted of espionage by a Pakistani military court. 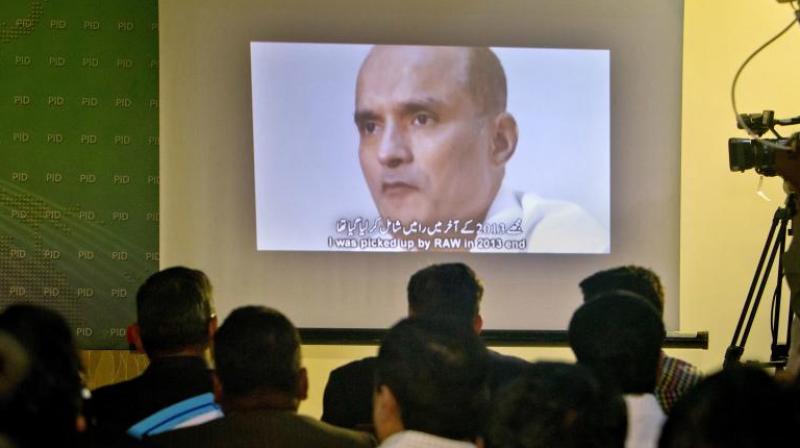 New Delhi: The International Court of Justice (ICJ) at the Hague on Thursday will pronounce its verdict on India's appeal against Kulbhushan Jadhav's death sentence in Pakistan. According to government sources, the international court will give its verdict around 3.30 pm (IST).

"The ICJ, the principal judicial organ of the United Nations, will deliver its Order on the request for the indication of provisional measures made by India in the Jadhav Case (India v. Pakistan), tomorrow on Thursday 18 May 2017.

"A public sitting will take place at 12 noon at the Peace Palace in The Hague, during which Judge Ronny Abraham, President of the Court, will read the court's decision," the international court said in a release today.

On Monday, ICJ saw both countries go hammer and tongs at each other, Pakistan raked up the alleged passport of former Indian naval officer Kulbhushan Jadhav to argue that India had deliberately given him a passport with a “Muslim name (Hussein Mubarak Patel)” to facilitate covert and illegal terror operations in Balochistan, adding that the Vienna Convention provisions on consular access were not intended for a “spy” involved in terror activities.

New Delhi argued before the court earlier in the day that India had not even been given consular access to Jadhav by Pakistan despite repeated requests in violation of the Vienna Convention and that the Pakistani military court’s verdict sentencing him to death had “no credibility”.

Accusing New Delhi of using the ICJ as a stage for “political theatre” and claiming that Islamabad “will not respond in kind”, Pakistan maintained India was “wrong in invoking the jurisdiction of this court”, arguing that India’s application was “unnecessary and misconceived” and must be dismissed.

But New Delhi, in a strong plea earlier in the day, demanded the immediate suspension of the death sentence given to Jadhav by the Pakistani military court. After hearing both parties, the ICJ said it would announce its order in a public hearing, the date of which will be publicly communicated.

The Indian delegation included joint secretary (dealing with Pakistan-related issues) in the ministry of external affairs (MEA) Deepak Mittal and eminent lawyer Harish Salve, both of whom addressed the court while the Pakistani representatives got their turn a few hours later. India presented its case in about 90 minutes while the Pakistanis wrapped up their arguments in less than an hour.

“The graver the charges, the greater the need for continued adherence of the Vienna Convention. Jadhav has been in judicial custody without any communication with his family,” Salve said.

Describing the situation as “grave and urgent”, India said it had not been given the copy of the charges filed against Jadhav. India sought relief from the ICJ including immediate suspension of the death sentence awarded to Jadhav, and restraining Pakistan from giving effect to the sentence awarded by the military court, and directing it to take steps to annul the decision of the military court. India has accused Pakistan of “egregious violations of the Vienna Convention on Consular Relations” (hereinafter the ‘Vienna Convention’) in the matter of the detention and trial of Jadhav.

While New Delhi said Pakistan had attached conditionalities in return for consideration of consular access which was unacceptable, Islamabad however claimed that it had been prepared to grant consular access with reference to a bilateral agreement in 2008 between the two sides. While India had expressed fears that Pakistan could execute Jadhav even before the hearing was over, Islamabad said it was false that Pakistan would execute Jadhav immediately since he was entitled to a clemency period of 150 days (5 months) provided to him. Islamabad also advocated an “expedited hearing which would dispel any suggestion for the need for provisional measures”, adding that “Pakistan would be content for the court to list the application of India for hearing within six weeks”. India sought relief from the ICJ “by way of immediate suspension of the sentence of death awarded” to Jadhav.

Interestingly, ICJ denied permission to Pakistan to play the purported “confessional” video of the retired Navy officer at the public hearing, but Pakistani representatives at the ICJ claimed the Court was “aware of the contents”. India has said the so-called confession was obtained from Jadhav by Pakistan in military captivity and that it has no credibility.

Pakistan’s lawyer Khawar Qureshi claimed India has not proved that Jadhav is its national and that consular access cannot be given. Qureshi said, “The Vienna convention article 36 which adopted to set up standards of conduct particularly concerning communications and contact with nationals of the sending state which would contribute to the development of the friendly relations among nations... The observation we made immediately is this is unlikely to apply in the context of a spy, terrorist sent by a state to engage in acts of terror.”

But, the MEA’s joint secretary Deepak Mittal told the court in opening remarks, “Jadhav has not got the right to get proper legal assistance and the right to consular access. There is an immediate threat to him to be executed even before a decision is passed.”

“The execution of the death sentence cannot be done while this court is hearing the appeal. Else, it will be a violation of the Vienna Convention,” Harish Salve said. He said India “cannot be hostage” to demands by Pakistan for joining the investigation without even granting consular access.

India has said Jadhav was “kidnapped from Iran, where he was carrying on business after retiring from the Indian Navy, and was then shown to have been arrested in Balochistan on 3 March 2016”.