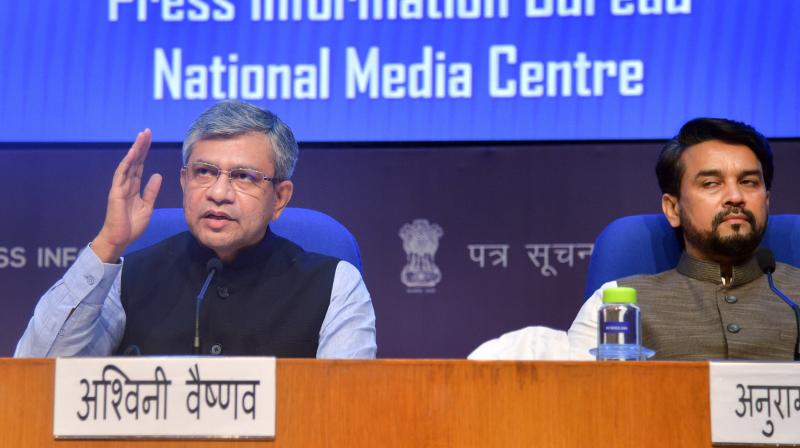 New Delhi: In a bid to provide substantial relief to the cash-strapped telecom companies like Vodafone Idea, which owes thousands of crores in unprovisioned past statutory dues, the Union Cabinet on Wednesday approved a crucial package for the telecom sector. The slew of measures granted to the sector include a moratorium on unpaid dues, redefining adjusted gross revenue or AGR prospectively and cuts in spectrum usage charges, etc.

Announcing the decision on the sector, communications and IT minister Ashwini Vaishnaw said that all those who will avail of the moratorium will have to pay some interest. The moratorium will start from October 1. “The reforms are deep and broad. They are structural. These reforms will bring in change today, tomorrow and in the future as well. I do not like to put a number on the package as it is revenue-neutral for the government,” the minister said, adding that the moratorium will not impact the government’s revenues.

The package comes six weeks after Kumar Mangalam Birla resigned from the post of chairman of Vodafone Idea Ltd on August 4. Vodafone, which was created from the merger of British telecom giant Vodafone’s India unit and Birla’s Idea Cellular Ltd, has to pay about Rs 50,399.63 crores in statutory dues dating back over past many years.

According to top government sources, the proposed measures will be beneficial for the ailing telecom companies and will pave the way for reforms in the sector as well. “Besides, these concrete measures taken by the government are expected to ease the cash flow issues being faced by some players in the industry,” industry sources said.

“The steps being deliberated will offer immediate relief to the sector. There is also a component of equity-related conversion, that is being mulled, which, if accepted, will offer a gesture of goodwill and help companies raise funds,” the sources added.

Vodafone Idea Ltd, in its annual report, has flagged the industry’s “unsustainable financial duress” and hoped that the government would provide the necessary support to address “all structural issues” faced by the sector. The total gross debt (excluding lease liabilities and including interest accrued but not due) as of June 30, 2021 of VIL stood at Rs 1,91,590 crores, comprising of deferred spectrum payment obligations of Rs 1,06,010 crores and adjusted gross revenue (AGR) liability of Rs 62,180 crores that are due to the government.