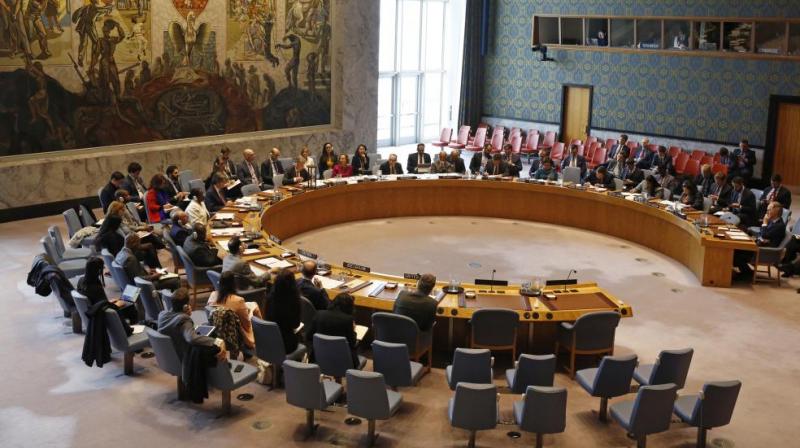 The UN Security Council on Friday began a rare closed door meeting to discuss India revoking the special status of Jammu and Kashmir after Pakistan, backed by its all-weather ally, China, requested 'closed consultations' on the issue. (Photo: File)

United Nations: The UN Security Council on Friday began a rare closed door meeting to discuss India revoking the special status of Jammu and Kashmir after Pakistan, backed by its all-weather ally, China, requested "closed consultations" on the issue.

The outcome of the UNSC meeting will not be a formal pronouncement as the consultations are informal in nature. India and Pakistan are not attending the meeting, which is open only to the five permanent members and 10 non-permanent members.

China, a permanent member of the UNSC and close ally of Pakistan, had asked for "closed consultations" in the Council, which began its deliberations at 10 am (7:30pm IST) in the Security Council Consultations Room.

India has categorically told the international community that its move to scrap Article 370 of the Constitution revoking the special status to Jammu and Kashmir was an internal matter and has also advised Pakistan to accept the reality.
Russia's deputy permanent representative, Dimitry Polyanskiy told reporters before entering the meeting room that Moscow's view is that it is a "bilateral issue" between India and Pakistan. He said the meeting was being held to understand what is happening. "That's what closed consultations are for. What does Russia think the next step should be- we favour bilateral track between india and Pakistan. You know our position. It hasn't changed. Today we have closed consultations and we will just exchange opinions and see what we can do and what we cannot do. It is a normal process."

When asked if Russia was concerned over the tense situation between India and Pakistan, Polyanskiy said, "we are very much concerned. We hope to avoid it. Asked if the Council can play a useful role, he replied, "We first need to discuss and then we'll see."

Replying to another question, he said, "sometimes it is better not to touch upon such an issue. It's a bilateral issue," the Russian diplomat said. It is significant that the discussions are not being held at the horse-shoe table in the Security Council Chamber, which is a more formal format for meetings.

In a setback to Pakistan's intentions, the consultations on its letter to the Council are closed and informal and there will unlikely be a formal pronouncement after the meeting, diplomatic sources said.

In the letter to the UNSC, Pakistan had requested that its representative be allowed to participate in the meeting, in accordance with the relevant provisions of the Charter of the United Nations and rule 37 of the provisional rules of procedure of the Security Council. But Pakistan's request was not allowed, the sources said.

According to UN records, the last time "the Security Council addressed the dispute between India and Pakistan over the territories of Jammu and Kashmir" under agenda item 'The India-Pakistan question' was in 1965. The Council's schedule said "Security Council consultations (closed) India/Pakistan", listed for 10 am.

Sources said since it is a consultation, any outcome is not formal pronouncement. A UN diplomat had told PTI that China had asked for closed consultations on the Security Council agenda item 'India Pakistan Question'. "The request was in reference to the Pakistani letter to Security Council President Joanna Wronecka," the diplomat said.

Poland is the Security Council President for the month of August. The five permanent members of the UNSC are China, France, Russia, the UK and the US.

UN Secretary General Antonio Guterres has urged India and Pakistan to exercise "maximum restraint" and refrain from taking steps that could affect the status of Jammu and Kashmir. He had highlighted the Simla Agreement which rejects any third-party mediation on the issue.

Pakistan formally called for an emergency meeting of the UNSC to discuss India revoking the special status to Jammu and Kashmir, Foreign Minister Shah Mahmood Qureshi said on Thursday. Last Friday, Qureshi had air-dashed to Beijing for urgent consultations with the Chinese leadership on the issue of raising the Kashmir issue at the UNSC.
During his meeting with Chinese Foreign Minister Wang Yi on Monday in Beijing, External Affairs Minister S Jaishankar conveyed that India's decision to revoke the special status of Jammu and Kashmir was an internal matter. He said the issue related to changes in a temporary provision of the Constitution of India and was the sole prerogative of the country.

Jaishankar emphasised to Wang that these changes had no bearing on Pakistan as it was an internal matter. "It did not impact the LoC.

Where India Pakistan relations are concerned, Chinese side should base its assessment on realities. India, as a responsible power, had shown restraint in face of provocative Pakistani rhetoric and actions. India has always stood for normalisation of the ties in an atmosphere free of terror," the minister said.