The vehicle was coming towards the Valley from winter capital Jammu when it met with the accident near Ramban. 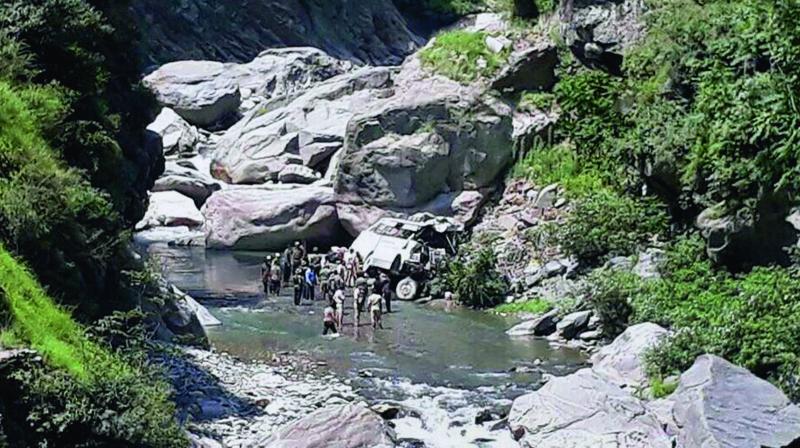 Security personnel carry out rescue work after a bus carrying Amarnath pilgrims fell into a gorge off the Jammu-Srinagar national highway in Ramban district. (Photo: PTI)

Srinagar: Sixteen Amarnath pilgrims were killed and 27 others wounded when the bus they were travelling in skidded off the road and fell into a 150-feet deep gorge near Ramban area along the Srinagar-Jammu highway on Sunday.

Director General of Jammu and Kashmir Police Shesh Paul Vaid told Deccan Chronicle that the bus was on its way to Kashmir from Jammu when accident occurred.

Media reports said the mishap occurred at Nichilana, about 11-km from the highway town of Banihal which is 107-km south of Srinagar.

According to the latest reports from Banihal, injured passengers are being treated at the Banihal sub-district hospital.

Witnesses said that local residents started a rescue operation immediately after the accident occurred and were soon joined by the police and a column of the Army.

Members of the State Disaster Management Force too have rushed to the area. Two Army helicopters too were pressed into service, reports added.

Reports also said that the Jammu and Kashmir Road Transport Corporation (J&KSRTC) bus with registration number JK02V- 0594 was part of an Amarnath convoy and that most probably its driver lost control over it and it fell into the gorge.

The 40-day annual yatra to Amarnath started on June 29 and, so far, nearly 200,000 devotees have paid obeisance at the 3,888-metre-high cave-shrine in Kashmir Himalayas. However, forty pilgrims have died in the first 18 days of the yatra including eighteen in mishaps, 14 due to cardiac arrest and other ailments and the remaining eight in the July 10 terror attack at Botengo in Anantnag district.