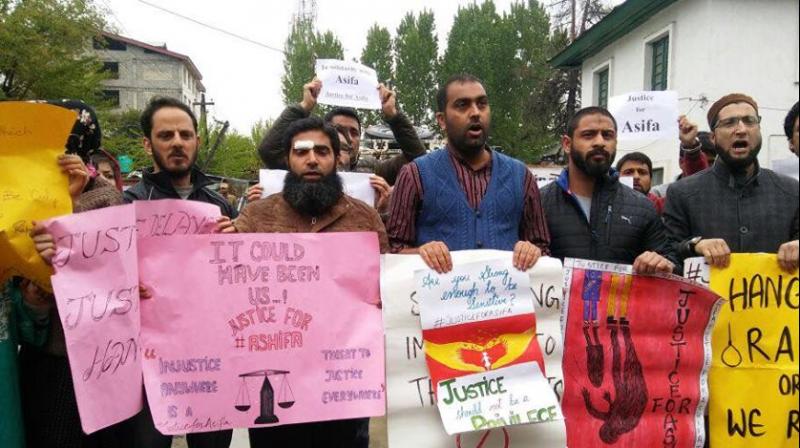 On Monday morning, the father of the 8-year-old rape victim moved the Supreme Court, requesting to transfer the trial outside Jammu and Kashmir, citing lack of safety and security for his family. (Photo: File)

New Delhi: The Supreme Court has asked the Jammu and Kashmir government to provide security to the family of the 8-year-old Kathua gangrape victim and their lawyer as well as family friends assisting them in the case.

The Supreme Court has also issued a notice to the Jammu and Kashmir state government seeking a reply on the Kathua rape and murder case plea that was file by the victim's father. The next hearing on the plea to transfer case will be on April 27.

On Monday morning, the father of the eight-year-old rape victim moved the apex court, requesting to transfer the trial outside Jammu and Kashmir, citing lack of safety and security for his family.

According to reports, the father of the minor rape victim has sought the case to be shifted to Chandigarh.

On Sunday, lawyer of the victim's family, Deepika Singh Rajawat, said that she fears she can be "raped or killed".

“I don't know how long I will be alive. I can be raped...My modesty can be outraged. I can be killed, I can be damaged. I was threatened yesterday (Monday) that 'we will not forgive you'." Rajawat said.

Also Read: I can be raped, killed: Lawyer for Kathua rape victim's family gets threat

The lawyer further said, "We don't think there is conducive atmosphere in Kathua for the trial."

The rape and murder of the minor girl in Kathua outraged the country after details were exposed in a police chargesheet last week. It became heavily politicised and two BJP ministers from Chief Minister Mehbooba Mufti's cabinet, who had defended the accused, were forced to resign.

Meanwhile, a second petition has been filed by the lawyer Deepika S Rajawat, who is representing the family of the Kathua rape victim, where she alleges threat to her life in pursuing case in Kathua court.

"We are apprehensive that the trial will not happen peacefully, seeing the condition in Jammu... Seeing that lawyers opposed it in Kathua and did not let the chargesheet proceed," a lawyer of the family said.

The young girl, who belonged to a nomadic Muslim community, was gangraped and murdered in January and her body was recovered from the forest a week after she went missing.