Kathua rape victim’s father cited safety and security as reasons behind asking for transfer of case outside J&K. 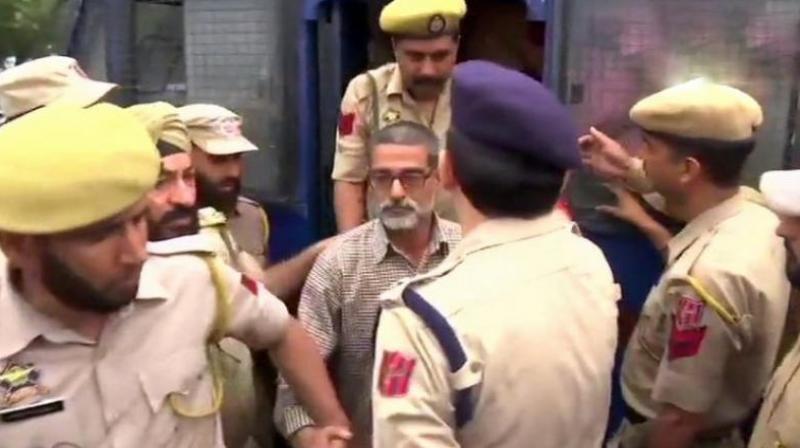 The accused in the Kathua rape and murder case have been produced at District Court. (Photo: Twitter | ANI)

New Delhi: The father of the eight-year-old girl who was gangraped and murdered in Kathua requested the Supreme Court to transfer the trial outside Jammu and Kashmir, citing lack of safety and security for his family.

According to reports, the father of the minor rape victim has sought the case to be shifted to Chandigarh.

The rape and murder of the girl, who belonged to a nomadic Muslim community, outraged the country after details were exposed in a police chargesheet last week. It became heavily politicised and two BJP ministers from Chief Minister Mehbooba Mufti's cabinet, who had defended the accused, were forced to resign.

Meanwhile, a second petition has been filed by the lawyer Deepika Singh Rajawat, who is representing the family of the Kathua rape victim, where she alleges threat to her life in pursuing case in Kathua court.

"We are apprehensive that the trial will not happen peacefully, seeing the condition in Jammu... Seeing that lawyers opposed it in Kathua and did not let the chargesheet proceed," a lawyer of the family said.

"We request the Supreme Court to transfer this case to some other state," the lawyer added.

The Supreme Court will hear the petition at 2 pm.

Meanwhile, members of the Jammu Bar Association have been holding rallies in support of the accused, saying they are not satisfied with the police investigation.

The lawyers have been on strike for 12 days demanding a CBI probe.

The Supreme Court has issued notice to the lawyers' associations in the state.

Manan Kumar Mishra, chairman of the Bar Council of India, said, "If any lawyer is found guilty, we have the rights to cancel their licence for a lifetime".