The President said that Iran wants 'Unity, consolidation, independence and support towards the east.' 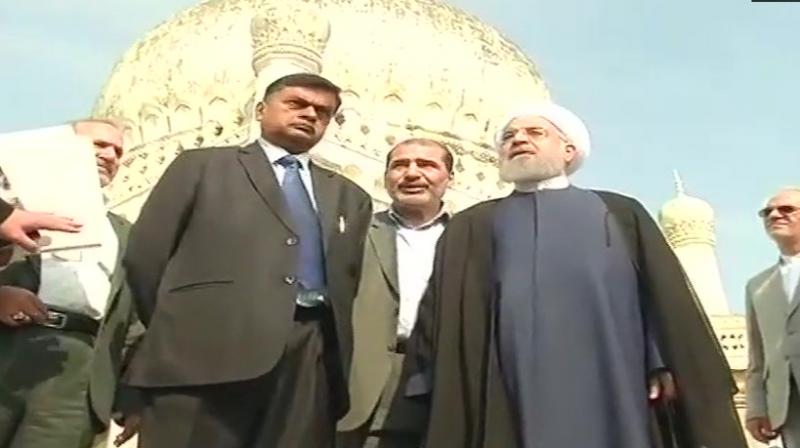 Rouhani advised the gathering to emphasize more in resolving their issues and strengthening relationships between the Muslim communities. (Photo: ANI)

Hyderabad: Iranian President Dr Hassan Rouhani who is on a three-day tour to India on Friday visited the Qutub Shahi tombs in Hyderabad.

"The Iranian president reached the tombs around 9 am. He was briefed about the historic site by officials," DCP (West Zone) Venkateshwar Rao said.

A project for restoration of the over 400-year-old complex started in 2013 after the Aga Khan Trust for Culture (AKTC) signed a memorandum of understanding with Telangana Department of Archaeology and Museums.

Telangana government officials and AKTC office-bearers briefed the Iranian president about the tombs.

In the afternoon, Rouhani would address a Muslim congregation at the historic Mecca Masjid after performing Friday prayers, official sources said.

Religious scholars from different schools of thought would also participate in this session, they said.

Rouhani began his three-day India visit on Thursday after his arrival in Hyderabad on Thursday evening.

This was his second visit to Hyderabad and the first after assuming charge as the president of Iran.

"He will leave for New Delhi this evening," the sources added.

Addressing a meeting of religious leaders belonging to different schools of thoughts, Rouhani on Thursday, urged different Muslims sects to stay united and fight the Western forces, and added that the community should put an end to internal differences.

“The enemy does not see the sect of Muslims before targeting. They only see that they are fighting the Muslims and target the community in large,” he said.

Rouhani advised the gathering to emphasize more in resolving their issues and strengthening relationships between the Muslim communities. He said Iran wants peace across the world and friendly relations with not only Islamic countries but other countries as well. It believes that there is no military solution to problems.

“The problem is only diplomatic in nature. More efforts and unity are only solution to the world problem,” Rouhani said. The President said that Iran wants “Unity, consolidation, independence and support towards the east.”

He said Iran has plan for the fraternity for India. “We do not want to have any difference with other countries”, he said adding how Iran “stood against the nations, and regions, in order to stop war conflict and violence.”

Rouhani said the people in the countries consider the relationship between Iran and India more for its historic links and ties dating back to several centuries.

“We are looking towards a more closer relationship with India,” he said.