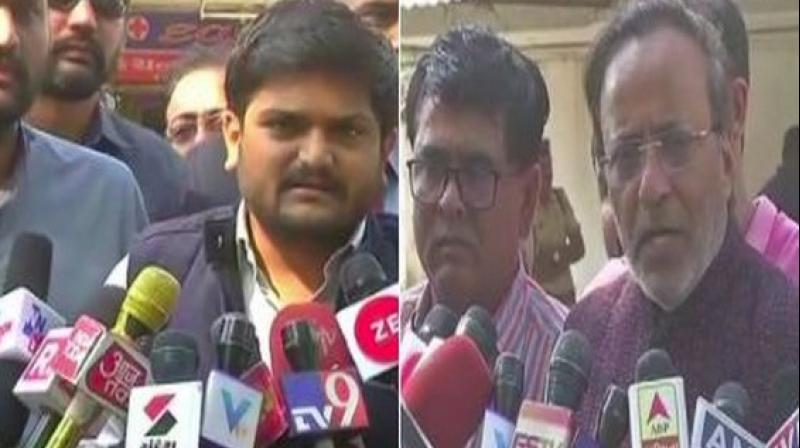 Hardik Patel, Cong leader Arjun Modhwadia met Togadia at a hospital in Ahmedabad where the VHP leader was admitted on Monday in an unconscious state. (Photo: ANI)

Ahmedabad: Terming Vishwa Hindu Parishad (VHP) leader Pravin Togadia's claim that he apprehended a plot to kill him in a police encounter as a "serious issue", opposition Congress in Gujarat on Tuesday sought an inquiry.

Congress leader Arjun Modhwadia met Togadia at a hospital in Ahmedabad where the VHP leader was admitted on Monday in an unconscious state.

Togadia, the VHP's International Working President, on Tuesday claimed that he went into hiding on Monday as he feared that police might kill him in an encounter after arresting him in an old case.

"We all know the track record of Rajasthan police (about encounters). We also know what happens to those who raise voice against the BJP, be it (BJP leaders) Sanjay Joshi, Haren Pandya or (CBI) judge (B H) Loya. To stop recurrence of such incidents, an independent inquiry must be conducted in Togadia's case," Modhwadia told reporters.

Hardik Patel, who had joined hands with the Congress in the recent Assembly elections, pointed fingers at Prime Minister Narendra Modi and BJP president Amit Shah.

"Rights of common people are being snatched. I may not agree with Pravinbhai's ideology, but I am always with him.

We all know what kind of conspiracies are being hatched by Narendra Modi and Amit Shah. I don't know about Hindus, but a leader of a Hindu organisation is definitely in danger now," he said.

Gujarat Congress chief Bharatsinh Solanki and the party's state in-charge Ashok Gehlot also demanded an inquiry into Togadia's claim that he could be killed in an encounter.

Gehlot was the chief minister of Rajasthan when Togadia was booked under section 188 of IPC for defying police orders in Gangapur town of that state in 2002.

"The law and order situation in Gujarat has completely deteriorated and it reflects in what Togadia claimed today (Tuesday). We demand an inquiry into Togadia's allegations to bring out the truth," Solanki said.

Gehlot said the issue is serious as both Gujarat and Rajasthan are ruled by the BJP.

"Togadia was arrested in the past too (in Rajasthan, when the Congress was in power). Togadia is known to have links with the ruling party. And if such things can happen with him, we can only imagine the situation of common people. This is a serious issue and the state government should order an inquiry," said Gehlot.

Togadia went untraceable on Monday after a team of Rajasthan police arrived in Ahmedabad to arrest him in the case registered against him at Gangapur in Sawai Madhopur district.

He was then found unconscious and hospitalised.

Addressing a press conference at the hospital on Tuesday, Togadia alleged that attempts were being made to silence him when he was raising the voice of the Hindu community.

He claimed that he went into hiding after learning that a Rajasthan police team had come to arrest him. He claimed he got messages from some people that he might be killed in a (fake) encounter.