Rahul Gandhi was responding to Trump's tweet that talked of America's evolving friendship with Pakistan. 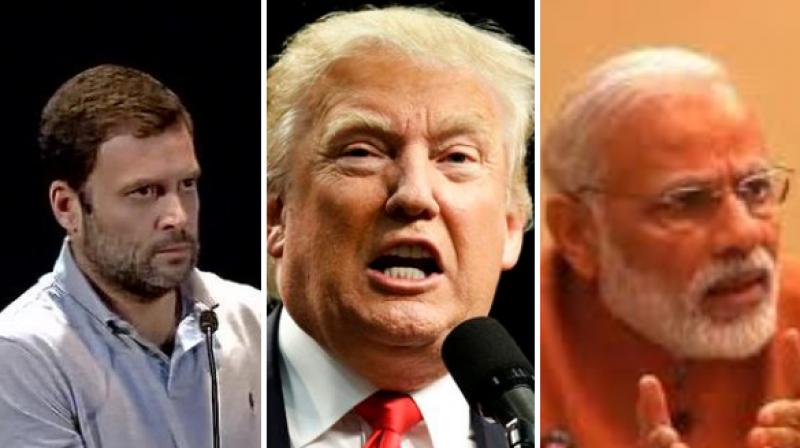 Trump's tweet comes a day after the Pakistani security forces rescued an American-Canadian family from the clutches of the Haqqani terror network operative in Islamabad. (Photo: ANI)

New Delhi: Congress vice-president Rahul Gandhi on Sunday attacked Prime Minister Narendra Modi over his claims of growing friendship between India and the United States, also sweeping US President Donald Trump and Pakistan away in a single stroke.

Starting to develop a much better relationship with Pakistan and its leaders. I want to thank them for their cooperation on many fronts.

Trump's tweet had come a day after the Pakistani security forces rescued an American-Canadian family from the clutches of the Haqqani terror network operative in Islamabad.

In a marked turnaround of sorts, Trump had earlier accused Pakistan of "housing the very terrorists that we are fighting. But that will have to change, and that will change immediately."

This was after Prime Minister Modi's June visit to the US wherein Trump's description of the former as a 'true friend' had set the tone for a successful bilateral meeting between the two nations, and rightly so, from their bear-hug to their praises for each other, everything reeked of a growing bonhomie between the world leaders.

The Congress had back then too downplayed the essentiality of the visit and its aftermath.

Meanwhile, several media reports have cornered Trump over his sudden claims of growing ties with Pakistan, accusing him of going back on his word and policies of counter-terrorism.

Read: Donald Trump to send lieutenants to Pakistan with message to curb terror

Reports also say that officials in India are now keen to see the follow-up actions of the US President.

The tweet is also likely to become a part of the discussions between Indian leaders and US Secretary of State Rex Tillerson, when he visits India in the last week of October.