Till now, only the BSF that guards the Indo-Pak border had an artillery unit and some mechanised components to aid it. 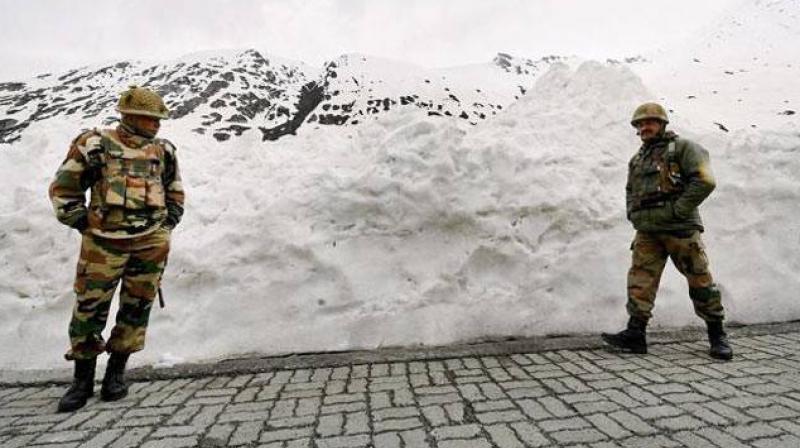 The decision to raise such a military-style combat wing in the paramilitary was taken after the Union home ministry recently approved deployment of snow scooters at all the high-altitude border outposts of the mountain-warfare trained force along the 3,488-km long frontier it guards. (Photo: Representational/PTI)

New Delhi: For the first time in its over 50 years history, the ITBP is raising and deploying a mechanised column of power vehicles and machines to speedily mobilise troops along the Sino-India border in case of Chinese military transgressions and Doklam-like standoffs.

The decision to raise such a military-style combat wing in the paramilitary was taken after the Union home ministry recently approved deployment of snow scooters at all the high-altitude border outposts of the mountain-warfare trained force along the 3,488-km long frontier it guards.

A senior home ministry official told PTI on the condition of anonymity that the mechanised column of the force will comprise over 250 Sports Utility Vehicles (SUVs), all-terrain vehicles (ATVs), snow scooters, excavators and few other medium-lift four-wheeled vehicles.

While the army has the mechanised infantry, it was essential to have a mechanised column in the border guarding force as it secures this border in peace times and will bear the first onslaught in case of a war or a conflict, the official said explaining the rationale for the latest move.

Till now, only the Border Security Force under the home ministry, that guards the Indo-Pak border, had an artillery unit and some mechanised components to aid it.

A proposal to raise a full-fledged mechanised column under the Indo-Tibetan Border Police (ITBP) force was moved by the forces’ headquarters here sometime back, the official said, with the force Director General (DG) R K Pachnanda making a specific presentation to the ministry in this context.

The about 90,000-personnel force has sanctions to procure about 150 SUVs for high-altitude deployment, out of which it has about five dozen already deployed, half-a-dozen snow scooters and few excavators to clear snow-bound passes and landslide-prone border tracks.

A senior ITBP official said many more such vehicles and machines, including anti-skid ATVs, will be procured by the force in the next few months.

The force has about 30 border posts above the height of 15,000 feet and some 50 such posts above 12,000 feet and the home ministry has accorded sanctions to the ITBP to have at least one snow scooter at each of these frontier bases.

The force has also been given sanctions to upgrade its firepower by modernising the support weapons like 81mm mortars, he added.

“Sanctions have already been accorded to procure modern machines and vehicles for the force.

So, apart from expeditiously completing the construction of China border roads in the wake of Doklam-like incidents and transgressions, the government has decided to strengthen the assets and strength of the both the army and the ITBP, the first line of defence on the Line of Actual Control (LAC),” the home ministry official said.

The defence ministry had recently decided to significantly enhance infrastructure along this border including around the areas of dispute with the Chinese forces.

The decision was taken at the Army’s commanders conference which extensively deliberated on the Doklam face off with China besides analysing all possible security challenges on the northern border.

The ITBP, as part of bolstering its capabilities to effectively secure this border, had last year procured over six dozen SUVs and sent them to far-flung border areas for patrol and transportation of troops and had similarly procured five snow scooters early this year.

The force was raised in 1962 in the aftermath of the Chinese aggression.