India   All India  15 Aug 2018  350 Armymen appeal to Supreme Court against dilution of Afspa
India, All India

350 Armymen appeal to Supreme Court against dilution of Afspa

Admitting the petition, a bench of Chief Justice Dipak Misra and Justice A.M. Khanwilkar agreed to hear the matter next Monday. 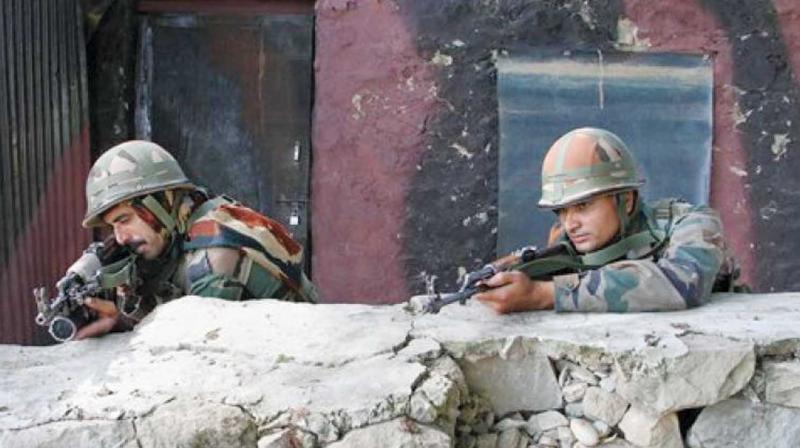 Army personnel during an operation in J&K.

New Delhi: A group of 350 serving soldiers and senior Army officers, led by a colonel, moved the Supreme Court on Tuesday against the “dilution” of the Armed Forces Special Powers Act (Afspa), saying that the prosecution of soldiers serving in disturbed areas by civilian authorities like police and the CBI endangers “national security”.

Citing police cases against soldiers in Jammu & Kashmir and Manipur for civilian killings and other offences, the petitioners have alleged that FIRs and investigations against soldiers lowers their morale. They have sought directions from the apex court to ensure that no soldier is harassed by initiation of criminal proceedings or arrest for actions taken in good faith as part of their duties.

Admitting the petition, a bench of Chief Justice Dipak Misra and Justice A.M. Khanwilkar agreed to hear the matter next Monday.

After the 350 Army officers and soldiers petitioned the court, six Manipur police commandos also moved a plea stating that the top court’s bench led by Justice Madan Lokur, while hearing a petition alleging extra-judicial killings in Manipur, had remarked that they were “murderers”.

The commandos said that the comment, even before the trial has begun, suggests they will not get a fair trial.

Afspa allows soldiers serving in insurgency-hit areas to arrest, use force and even open fire on anyone without the prospect of facing prosecution for their actions.

The immunity that Afspa gives has often been criticised by rights activists as it gives soldiers a free hand, without any accountability for their actions. In all the states where the Army has been deployed in counter-insurgency operations, there have been several instances of rape, fake encounters and excessive use of force.

Seeking a direction to lay down guidelines to protect bonafide actions of soldiers under Afspa, the Armymen’s lawyer Aishwarya Bhati said that any dilution of the protection offered to the armed forces in disturbed areas would jeopardise the efficiency of operations against ultras.

Petitioner Col. Amit Kumar, who leads the 350 petitioners, said that the plea has been filed collectively by soldiers and serving officers of the Army for protecting the “sovereignty, integrity, security and dignity of the nation and restore the confidence and morale of the soldiers of the Indian Army”.

They said that it is imperative to protect soldiers engaged with direct proxy enemy and involved in insurgency operations.

The petition said soldiers are facing insurmountable difficulties and odds in performance of their duties in disturbed areas and they never hesitate to lay down their lives in the line of duty in order to uphold the dignity of the Indian national flag.

The ultimate sacrifice expected from a soldier cannot be sustained under a state of confusion or cloud, the petition said.

Lodging of an FIR without ordering a preliminary inquiry to ascertain the facts related to intention, error of judgment or the circumstances under which soldiers act, without giving a fair chance to the personnel facing allegations, is against the principle of natural justice, the petition said.

Two years ago, the Supreme Court said excessive force cannot be used on people even in insurgency-hit areas while hearing a petition on extra-judicial killings. Last year, it upheld the decision, which had directed the government to probe every such case.

Recently, the father of an Amy officer posted in Jammu and Kashmir approached the apex court seeking the cancellation of a police case against his son, who was leading a convoy that allegedly opened fire on a group of civilians during a protest in Shopian in March. Three civilians had died.