Shah was considered as the 'chief architect' of last year's unrest in various parts of South Kashmir. 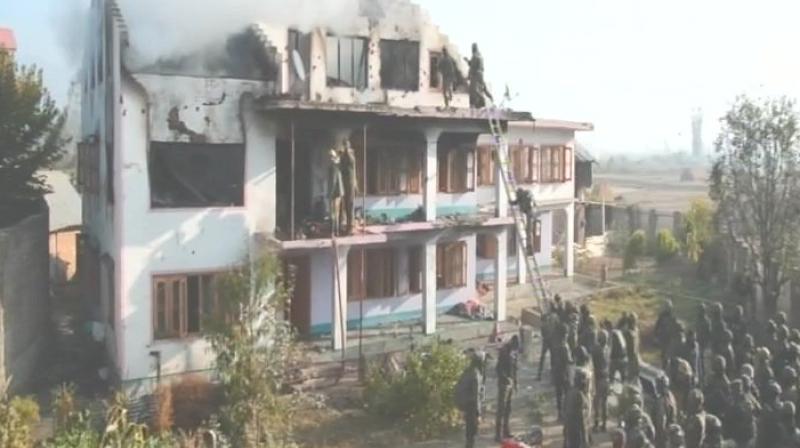 The militants opened fire on security forces which was retaliated by the law enforcement personnel, the police official said. (Photo: ANI/Twitter)

Srinagar: A top Lashkar-e-Taiba militant, Waseem Shah, believed to be the main architect of unrest last year in south Kashmir, was killed along with his accomplice in an encounter early on Saturday morning by the security forces in Pulwama district, police said.

Shah, 23, also known as 'Abu Osama Bhai' was killed at Litter area in Pulwama, a place considered to be a safe haven for militants. This is the first counter-insurgency operation in Litter area in four years.

Jammu and Kashmir police has been tracking the movements of Shah, who is considered as the 'don of Heff', another traditional stronghold of militants in South Kashmir's Shopian district.

He was found at a hideout at Litter and police and its special operation group team cordoned off the area, police said.

Read: 1 civilian dead, another hurt in crossfire between terrorists, security forces in Pulwama

Shah along with his bodyguard Nisar Ahmed Mir made an attempt to flee the area but could not penetrate the cordon which had been strengthened by the presence of CRPF and Army, they said.

Shah, who was wanted in various terror-related cases, was killed along with Naseer, another local boy who had joined militancy in May this year.

A college dropout, Shah, a resident of Heff-Shrimal in Shopian, joined militancy in 2014 and was considered as the 'chief architect' of last year's unrest in various parts of
South Kashmir.

Born in a middle class family of Gul Mohammed Shah, who ran his fruit business, Shah was an active supporter of Lashkar-e-Taiba militant group since his school days and had doubled up as a courier boy for the outfit, police said.

Off late, Shah, who carried a cash reward of Rs 10 lakh on his head, was recruiting fresh cadres for the militant outfit.

He had been involved in various attacks on security forces in South Kashmir, police said.