India   All India  14 Aug 2018  Would've been buried with Karunanidhi if he weren’t allowed space at Marina: Stalin
India, All India

Would've been buried with Karunanidhi if he weren’t allowed space at Marina: Stalin

'We met the chief minister and made our request. He said the norms don’t allow a former CM to be buried at Marina Beach,' said Stalin. 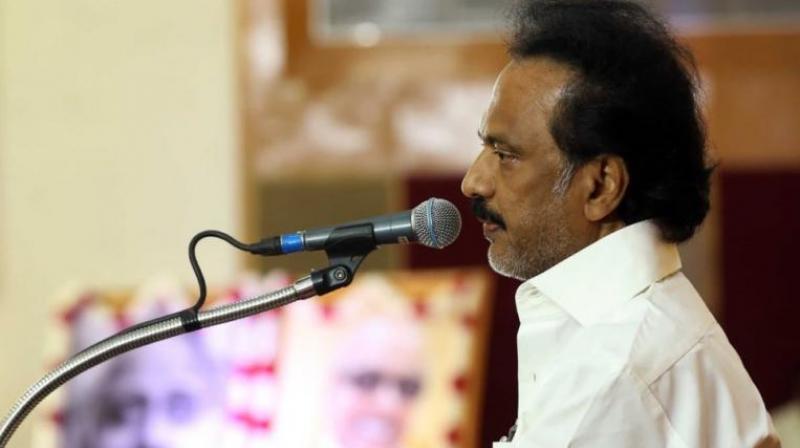 Praising the DMK's legal team led by T Wilson, Stalin said they approached the Madras High Court late at night and won the case the next day. (Photo: Twitter | @mkstalin)

“When Kalaignar was in his last stage I held chief minister's hands and pledged to fulfill his (Karunanidhi) last wish to be buried in Marina beach but Tamil Nadu government did not agree,” Stalin said at party's emergency Executive Committee meeting on Tuesday.

Stalin added that he had not gotten permission to bury his father at the Marina Beach, he too would have died.

Stalin said, “We (DMK leaders and family members) met the chief minister (Palanisamy) and made our request. He said the norms do not allow a former chief minister to be buried at Marina Beach.”

“If this wouldn't have happened then surely I would have been the person to be buried along with our leader,” Stalin said.

He said the decision to meet Palanisamy in person was taken after doctors declared that Karunanidhi was in critical condition.

According to Stalin, Palanisamy said the matter would be looked into -- but this was stated in order to send out the delegation.

After the announcement of Karunanidhi's death at 6:10 pm on August 7, the government issued a statement formally refusing a burial space at Marina.

Praising the DMK's legal team led by T Wilson, Stalin said they approached the Madras High Court late at night and won the case the next day.

“I give the entire credit of the victory (burial of Karunanidhi at Marina Beach) to the lawyers,” Stalin said, adding that had the case been lost, a situation would have arisen leading to his own burial next to his father Karunanidhi.

Stalin had broken down soon after the Madras High Court in an early morning hearing allowed Karunanidhi burial at Marina Beach.

Read: Stalin breaks down after HC ruling on Karunanidhi's burial at Marina