India   All India  14 Jul 2020  Is it safe to visit Amarnath when COVID situation in J&K is grim?
India, All India

Is it safe to visit Amarnath when COVID situation in J&K is grim? 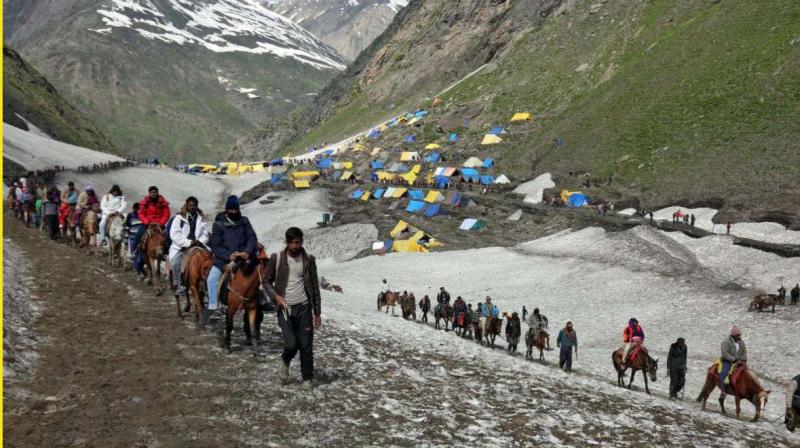 SRINAGAR: The security forces on Monday enforced virtual lockdown strictly in major parts of Srinagar in view of the rapid surge in the number of Corononavirus or COVID-19 deaths in Jammu and Kashmir with its summer capital reporting the maximum number of 46 followed by Baramulla district with 35 deaths.

The authorities said that as many as 88 areas of Srinagar have been notified as ‘red zones’ in view of a sharp spike in COVID-19 positive cases reported in the district in the last couple of weeks. “The decision to impose restrictions was taken after recommendations of experts and is aimed at containing further spread of the COVID-19 disease,” an official spokesman said. Srinagar’s DC Shahid Iqbal Choudhary ordered for sealing off all these 88 zones “with strict enforcement of restrictions on public movement and activities of all sorts”.

Restrictions on public movement and certain curbs on trade activities were earlier re-imposed in some other districts of the Union Territory (UT) including Rajouri and Kupwara whereas a few more are following the suit as positive cases of the deadly virus are increasing by the day in both Kashmir Valley and Jammu region.

However, many people saw security restrictions put in place in Srinagar from Sunday evening also as the government’s ploy to prevent rallies and protests on July 13 to mark the Kashmir martyrs’ day. Even though some local organizations representing the Valley traders and also a doctors’ association had urged the authorities to re-impose lockdown in view of “alarming” COVID-19 situation, many people took to social media platforms to question the government’s wisdom in reopening the scenic Valley for outside tourists and its being adamant to organize the annual pilgrimage to revered cave-shrine of Amarnath from last week of July.

Sections of public and some political parties have also berated the UT administration’s move of reopening parks and gardens including Srinagar’s famed Mughal gardens to the general public from July 8 even after knowing the fact that the number of COVID-19 fatalities and positive cases were only increasing in the UT particularly Kashmir Valley.

Ironically, the authorities on Sunday evicted all local visitors holidaying in Valley’s premier resort Pahalgam and some other picnic spots in Anantnag and Kulgam districts after giving them a short notice of just two hours to leave but late in the evening announced that J&K was now ready to be reopened for tourism from July 14 partially.

“There will be partial opening of the tourism sector for visitors from outside J&K, limited to tourists arriving by air only,” it said. It also said, “In the view of the Covid related measures, it is felt imperative to put in place a protocol to be followed by the tourists as well the persons/authorities engaged in the hospitality sector.”

However, questions are being asked here that if the surge in the number of COVID-19 deaths and positive cases has created an “alarming” situation in the Valley and some parts of Jammu, how is the UT safe for outside tourists even if they are being asked to follow certain guidelines while being in the Valley or Jammu.

“I think for political reasons they are misleading potential tourists and Amarnath pilgrims or simply seeking to put their lives in risk,” said a local tourist trader Ghulam Nabi Karnai.

He added, “We have suffered enormously in the past few years as not many tourists turned up for varied reasons. Last year, those who were holidaying in the Valley were abruptly asked to cut short their visit and leave. We want tourists to visit us as soon as possible because we earn our living from them but if COVID-19 has created a dangerous situation for us locals how can this place be safe for them?”

But the authorities here insist that all precautionary measures as per the pandemic control guidelines would be strictly followed in both cases- allowing tourists to visit J&K and in organizing the Amarnath yatra "in a restricted and well-thought-out manner".

Meanwhile, the government on Monday said that 314 new positive cases of COVID-19 surfaced in the UT including 225 in the Valley and 89 in Jammu division. This takes the total number of positive cases in J&K to 10,827. Also eight more deaths were reported on Monday – all from Kashmir Valley, taking the toll to 187. The authorities, however, also said that over six thousand patients have recovered from the disease, so far. End it