The death toll from the pandemic has climbed to 4,75,636 with 202 new fatalities 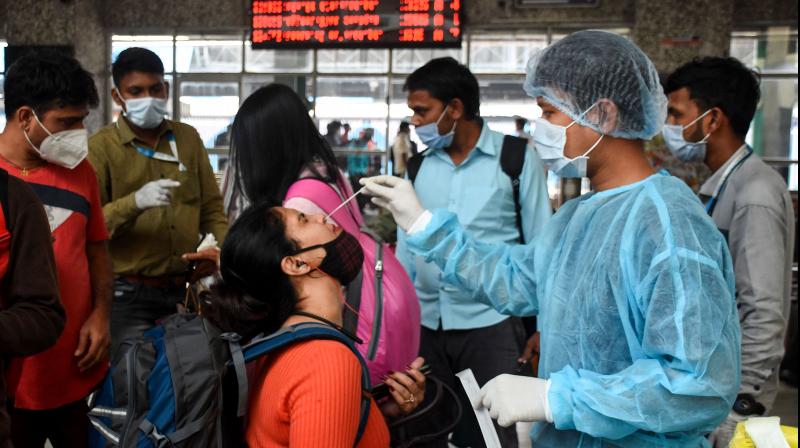 A healthcare worker collects a swab sample of a passenger for Covid-19 test, at Bandra Terminal, in Mumbai. (Photo: PTI)

New Delhi: India's coronavirus tally rose to 3,46,97,860 with 7,350 people testing positive for the infection in a day, while the number of active cases declined to 91,456, the lowest in 561 days, the Union Health Ministry data showed on Monday.

The death toll from the pandemic has climbed to 4,75,636 with 202 new fatalities, according to the data updated at 8 am.

The daily rise in new coronavirus infections has been recorded below 15,000 for the last 46 days now.

A decline of 825 cases has been recorded in the active COVID-19 case count in a span of 24 hours.

The daily positivity rate was recorded at 0.86 per cent. It has been less than 2 per cent for the last 70 days.

The weekly positivity rate was recorded at 0.69 per cent. It has been below 1 per cent for the last 29 days, according to the ministry.

The number of people who have recuperated from the disease surged to 3,41,30,768, while the case fatality rate was recorded at 1.37 per cent.

The cumulative doses administered in the country so far under the nationwide COVID-19 vaccination drive has exceeded 133.17 crore.

India crossed the grim milestone of two crore coronavirus cases on May 4 and three crore on June 23.

The 202 new fatalities include 143 from Kerala, and 16 from Maharashtra.

Of the 143 deaths, 34 were recorded over the last few days and 109 were designated as COVID-19 deaths after receiving appeals based on the new guidelines of the Centre and the directions of the Supreme Court, according to a released issued by the Kerala government on Sunday.

The Health Ministry stressed that more than 70 per cent of the deaths occurred due to comorbidities.