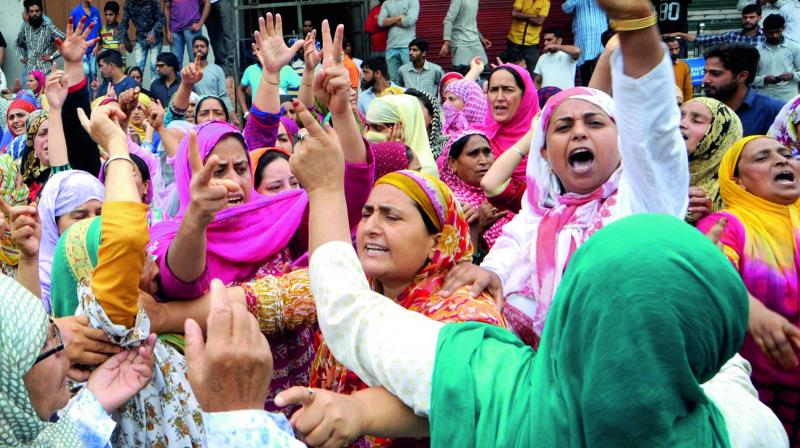 Women shout slogans at Hyderpora in Srinagar on Wednesday during funeral prayers for one of the three militants killed in the overnight encounter with security forces in Budgam district. (Photo: H.U. Naqash)

Srinagar: About half-a-dozen persons, including a press photographer, were injured when the security forces on Wednesday fired teargas canisters and shotgun pellets to break a procession of mourners during the funeral of one of the three militants killed in a firefight with troops earlier during the day.

Reinforcements from the Jammu and Kashmir police and Central paramilitary forces enforced a security lockdown in parts of Srinagar, including the old town, as tensions rose after the killing of three Hizbul-Mujahideen militants in central district of Budgam.

The mobile Internet services were snapped and train services partially suspended “as a precautionary measure”. Irate crowds took to streets in a few areas of Srinagar and Budgam districts whereas large number of people turned up at the funeral of the slain militants in Srinagar and Budgam.

Witnesses said that the J&K police and Central pramilitaries used force to break the funeral procession of slain militant Sajid Ahmad Gilkar, a resident of Pandan-Nowhatta in central Srinagar. The other slain militants have been identified as Aaqib Gul of Gooripora Hyderpora and Javaid Ahmed Shiekh of Beerwah in Budgam district. Gilkar’s body was taken inside the Grand Mosque premises for the funeral prayer (Namaz-e-Jinaza) amid chanting of pro-freedom and anti-India slogans. Aman Farooq, a photojournalist with a local newspaper, was among those injured in the pellet firing, witnesses said. Farooq said that he was hit by pellets in the head and arms while covering the funeral.

The gunfight between the gunmen and the security forces broke out in Radbugh village of Bunm-akhama area of Magam (Budgam) on Tuesday evening and ended with the elimination of all the three holed up militants on Wednesday morning, the officials said.

The trio was hiding in a private house owned by one Mohammad Ramzan Dar at Radbug when the security forces, including the Army’s Rashtriya Rifles, the J&K police’s counter-insurgency Special Operations Group and the CRPF, laid siege to the village following intelligence inputs about the presence of militants, the officials said. A gunfight started between the two sides soon. “The holed up terrorists opened fire on the security forces as they zeroed in on the house. The fire was returned, triggering the encounter,” said a police spokesman here.

An Army official added that the cordon-and-search operation was launched at around 6 pm on Tuesday and “contact” with militants was established at about 8.30 pm contact. However, the operation was halted for the night to avoid collateral damage. Yet the security forces maintained the cordon of the area using searching lights and other equipment to stop the militants from escaping.

He also said that the militants were gunned down when they tried to break the security dragnet and escape on the Wednesday morning. “They came out of the house firing indiscriminately in their attempt to break the cordon and escape but the security forces in swift action gunned them down outside the house,” the Army official said.  Three weapons were found on the slain militants, the officials said.

The clash comes two days after seven Amarnath pilgrims were killed and nineteen others were injured, three of them critically, when the bus they were travelling in was caught in crossfire between militants and the J&K police along the Botengo-Khanabal stretch of the Srinagar-Jammu highway. The police has blamed the attack on the bus on Lashkar-e-Taiba but the terror group has denied its involvement and said that the attack on pilgrims was carried out at the behest of Indian intelligence agencies. The gory incident evoked widespread condemnations in Jammu and Kashmir, rest of the country and by various human rights groups including Amnesty International, the United States and several other countries.

Official sources said that the curfew or curfew-like restrictions will not only continue in Srinagar areas but some other parts of the summer capital and rest of the Valley may also be brought under similar curbs from midnight in view of the Kashmir martyrs’ day.

The separatists have planned rallies and also called for a state-wide shutdown to mark the occasion.

July 13 is observed as ‘martyrs’ day’ in both parts of divided Jammu and Kashmir as on this day 66 years ago as many as 22 Kashmiris were shot dead by the troops of autocratic Dogra Maharaja outside Srinagar’s central prison where an in-camera trial of a rebel Abdul Qadeer was being held. The bloody incident heralded an uprising against the Maharaja’s rule and for independence of the Muslim majority state. While July 13 is observed as ‘martyrs’ day’ by both mainstream and separatist political parties and is an official holiday, the latter insist that the struggle for “independence” is still on as India “forcibly occupied part of the State in 1947”.