Justice for Kathua rape victim: If we don't rise now, then when?

What could an eight year old probably have done to invite this fate upon herself? 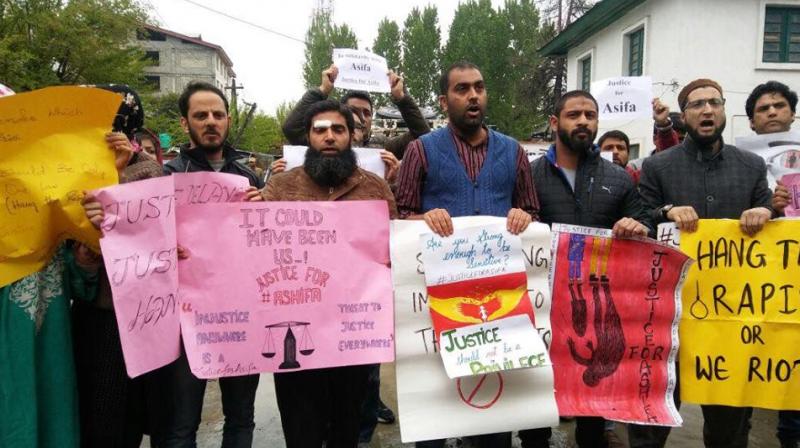 The vicitm was born a Kashmiri Muslim into a family that falls under the category "Nomadic Tribe". Needless to say, her family was extremely poor. She perfectly embodied all the marginalities that India has systematically oppressed and tortured over years. (Photo: Facebook | @justiceforasifa)

Mumbai: Last night was not comfortable. Many of us haven't slept, uncomfortable and squirming all night, thinking of the pain the eight-year-old from Kathua had to withstand.

By Friday morning, in urban metropolitan India, her name is everywhere. In varying degrees, there are posts of sympathy, horror, anger plastered across social media. Our opposition leaders are walking candle light marches in the capital. Our Bollywood stars have expressed their grief and shock on Twitter.

But, why? Why was she abducted, confined, raped multiple number of times and eventually, her head bashed? What could an eight-year-old probably have done to invite this fate upon herself? She was but a child, unable to tell the left apart from the right, according to her broken, grief-stricken father.

The eight-year-old was born a Kashmiri Muslim into a family that falls under the category "Nomadic Tribe". Needless to say, her family was extremely poor. She perfectly embodied all the marginalities that India has systematically oppressed and tortured over years.

The Nomadic Tribes and Denotified Tribes (NT/DNT) consist about 60 million people in India. Until independence, British laws classified them criminal under the Criminal Tribes Act, 1871.

Free India's government repealed this act in 1952. The groups have since been classified into Scheduled Castes or Tribes. To a liberal mind, decriminalisation by law is definitely an improvement. Politics of caste is, however, not that simple.

Decriminalisation by law does not guarantee removal of social stigma.

According to Sarayu Menon, former student of Criminology and Justice at Tata Institute of Social Sciences and currently involved in research on NT/DNT, they definitely carry the stigma of criminality, owing to their nomadic nature. They are always seen as a threat to mainstream pastoral society.

The little one probably did not even realise how much oppressive politics was running through her veins as she went about feeding the horses and playing with their two newborn lambs.

Bharatiya Janata Party's (BJP) Madhya Pradesh State President Nandkumar Singh Chouhan has claimed that the entire episode is actually a conspiracy by Pakistan, since the Hindu population in Kashmir is less than one per cent.

India and Pakistan has forever been at loggerheads over the occupation of Kashmir. A war fought largely between New Delhi and Islamabad has killed thousands in Kashmir in the struggle for 'Azaadi.' A multitude of others have been incapacitated for life.

She was a Muslim. In a country that is roaring for a Hindu nation, the unaware little girl did not know dying that a person especially travelled from Meerut to Kashmir, only to rape her. The predator would have found other feasts in his own jungle, but this was an exceptional opportunity to show 'them' where 'they' belong.

Did her rapists think that sexually brutalising an eight-year-old body was fun? Did rape before the murder make their message stronger? Women are doubly oppressed, in any situation.

Rahul Gandhi, in his candle light march, has said that it is not a political issue, but a social issue. It is about the safety of our women. India cannot treat its women like this anymore.

But she embodies a war that goes much deeper than that. She was politicised the moment she was born and if we appropriate her death according to our own comfort zones, then we better not ask for justice for her, but for justice for our own uncomfortable minds.

India should in unison, now more than ever, demand justice for all women, tribes and religions.

Because if not now, then when? If not us, then who?