The yatra, which passes through the Pahalgam market along the traditional route to the cave shrine, was, however, going on smoothly. 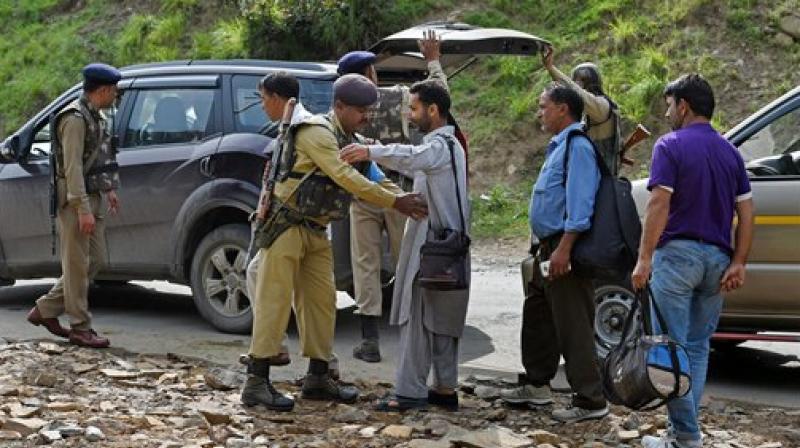 ecurity personnel frisking the yatris and the locals before they head towards the holy cave shrine following the militant attack on a bus in which seven pilgrims were killed and 19 others injured, at Nuwun base Camp in South Kashmir on Tuesday. (Photo: PTI)

Srinagar: The market in Pahalgam near the Nunwan base camp of the Amarnath yatra on Wednesday observed a shutdown to protest against the terror attack on pilgrims.

The yatra, which passes through the Pahalgam market along the traditional route to the cave shrine, was, however, going on smoothly.

"The shops and other business establishments in Pahalgam tourist resort observed a complete shutdown on Wednesday in protests against the attack on Amarnath pilgrims," a police official said.

Several trade bodies including the Kashmir Chamber of Commerce and Industry, travel and tourism players; and civil society groups on Tuesdsay held silent protest against the attack on Amarnath pilgrims.

Separatist groups including both factions of Hurriyat Conference and JKLF have also condemned the attacks on the pilgrims saying those behind the incident were not friends of Kashmiris.

Seven Amarnath pilgrims, including six women, were killed and 21 injured when terrorists attacked a bus in Kashmir's Anantnag district on Monday evening.

The attack took place when they were returning to Jammu from Srinagar, after visiting the cave shrine of Lord Shiva, located in the Himalayas at an altitude of 12,756 feet.