2 LeT militants killed in an encounter in J&K's Shopian

As the forces were conducting search operations, militants fired upon them, which led to a gun battle. 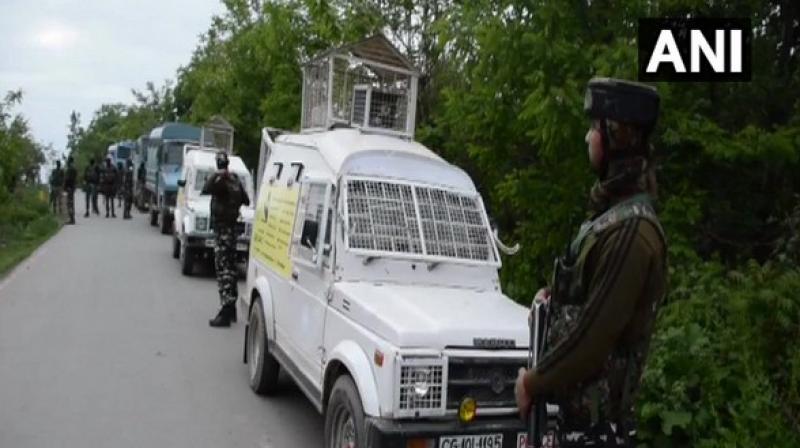 Weapons and other materials have been seized from the site of the encounter. (Photo: ANI)

The security forces launched a cordon and search operation in Hend Sitapur area in south Kashmir in the early hours of Sunday morning following specific information about the presence of militants there, a police spokesperson said.

He said as the forces were conducting searches, the militants fired upon them. The security forces retaliated the firing, ensuing a gunfight in which two militants were killed, he said.

The bodies of the slain militants have been recovered and they have been identified as Javid Ahmad Bhat, a resident of Redwani Kulgam and Adil Bashir Wani, hailing from Waripora area of D H Pora in Kulgam, the spokesperson said.

He said according to police records, both the militants were affiliated with the LeT outfit. "They were wanted by law for their complicity in a series of terror crimes, including an attack on security establishments and civilian atrocities. Several terror crime cases were registered against them," he said.

"Bhat had a long history of terror crime records and a series of terror crime cases were registered against him for planning and executing terror attacks in the area. He was also responsible for recruiting youth from adjoining areas of Kulgam to join proscribed terror outfits," the spokesperson said.

Similarly, Wani was also involved in several terror attacks and terror crime cases were registered against him, he said. The spokesperson said incriminating material, including arms and ammunition, were recovered from the site of the encounter.

All these material have been taken in the case records for further investigation and to probe their complicity in other terror crime cases, he added.

The spokesperson said with the efforts of police and security forces, it was a clean operation and no collateral damage took place during the exchange of firing.