Hoshiyar Yadav got infuriated when he asked to pay the toll and present documents of the car. 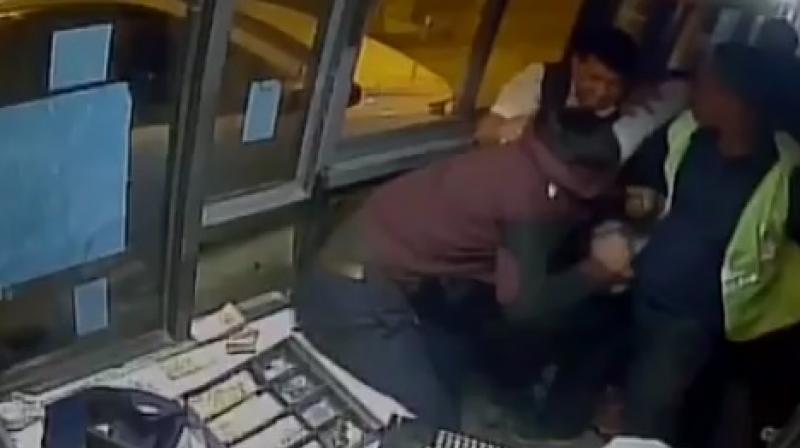 Yadav barged into the toll booth and started thrashing the victim. The booth was vandalized and all the things were thrown outside the booth. (Photo: Videograb)

A toll attendant was brutally beaten up allegedly by the former chairman of Gurugram Block Samiti after he asked him to pay toll fee at the Khidki Daula plaza in Gurgaon, with the entire incident captured on camera.

According to police, the incident occurred at around 9:30 pm on Saturday when the victim, Akshay who works as a toll attendant at the plaza asked the former chairman Hoshiyar Singh to pay the fee.

"After being stopped by Akshay and asked to pay toll fee and show the registration certificate of his car to check whether he enjoys exemption, Singh lost his temper and stepped out from his SUV. He then began to thrash the toll attendant in a fit of rage. He also dismantled the computer screen and machines in the cabin," Manish Sehgal, ACP (PRO) Gurgaon Police said.

#WATCH On being asked for their ID, 2 men beat up Gurugram toll employee & vandalise booth; 1 is former chairman of Gurugram Block Samiti. pic.twitter.com/PYmEOb0xPq

The entire incident was captured in the CCTV cameras installed at the toll plaza.

"The police was informed by the toll company manager and a complaint was filed here about the attack," the officer said.

"We are investigating the case and will take strict action against Hoshiyar Singh. The CCTV footage is being probed," Gurgaon Police said.