Both the constitutional provisions have been challenged in Supreme Court through a clutch of petitions. 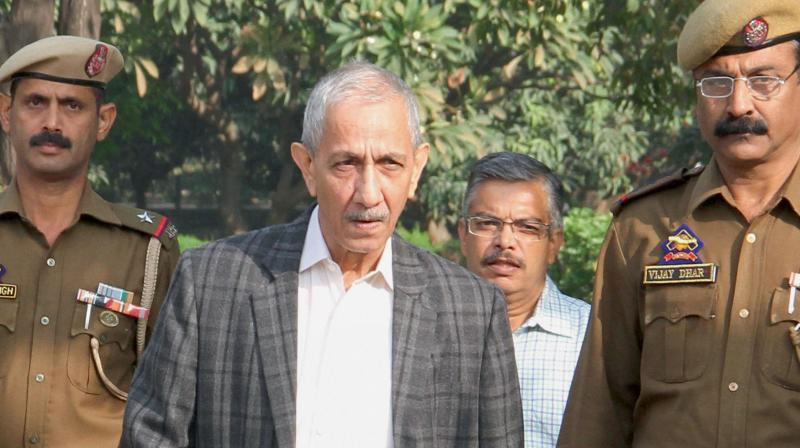 Dineshwar Sharma on his way for a meeting with various delegations in Jammu. (Photo: PTI)

Srinagar: The leaders of displaced Kashmiri Pandits have demanded that government should take immediate steps to “liberate” Pakistan-occupied-Kashmir (PoK) and also pave way for carving out a separate homeland within the Valley for minority Brahmin Hindu community.

Their third major demand projected before the Centre’s ‘special representative’ on Jammu and Kashmir Dineshwar Sharma during a meeting held in winter capital Jammu was abrogation of Article 370 and Article 35A which guarantee special status to the state within the Indian Union and empower the State Legislature to define “permanent residents” of the state and provide special rights and privileges to those permanent residents, respectively.

Both the constitutional provisions have been challenged in Supreme Court through a clutch of petitions.

A 4-member delegation of the representatives of displaced Kashmiri Pandits which met Mr Sharma in Jammu on Thursday night told him that they want the Centre to take “immediate” steps to “liberate” PoK “in consonance with the unanimous resolution passed by the Parliament in 1994”.

Mr Sharma, a 1979-batch IPS officer and former Director of Intelligence Bureau would be concluding his five-day visit of twin capitals on Friday. ‘This was his maiden visit to the Valley after the BJP on October 23 appointed him as its representatives to hold talks with all the stakeholders in the restive state.