Accusing the media of not showing the positive side of his personality, he claimed at the age of 53 he was fittest lawmaker in the country. 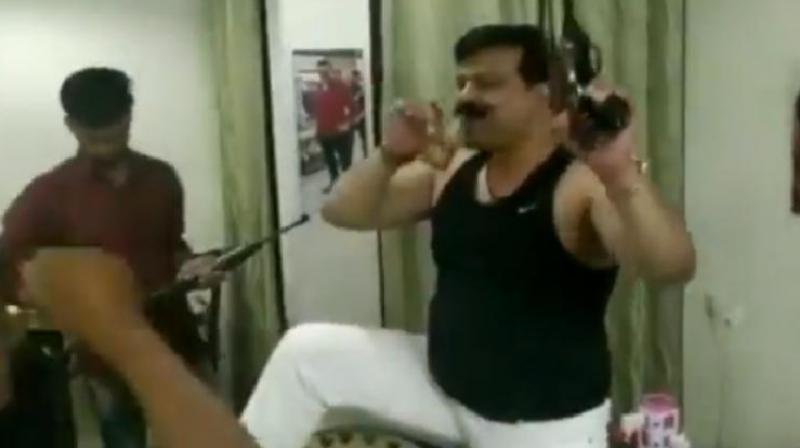 He said he had been playing with guns since his childhood. (Photo: Screengrab)

Dehradun: After a video purportedly showing him dancing to a Bollywood number with guns in hand went viral, suspended BJP lawmaker Kunwar Pranav Singh Champion on Wednesday claimed that the clip was edited and termed it an intrusion into his privacy.

"The video which has gone viral is edited and an intrusion into my privacy. I never used abusive words against anyone as is being shown by the media," he told a private news channel.

The guns with which he is seen dancing were "licensed, unloaded and not pointed at anyone", he said, adding that "there was nothing wrong in dancing with guns".

He said he had been playing with guns since his childhood.

Accusing the media of not showing the positive side of his personality, he claimed at the age of 53 he was the fittest lawmaker in the country.

"Show me a single four time MLA who has my level of fitness at the age of 53 and is as highly qualified as me. I am defying age. But the media never shows these positive aspects of my personality," Champion said.

However, taking cognisance of the viral video, Pradesh BJP sent him a show-cause notice and made a recommendation to the central leadership of the party for stern action against him saying indiscipline cannot be tolerated.

"There is a code of conduct for people's representatives in BJP which is a disciplined party that cannot compromise on principles," party's Uttarakhand in-charge Shyam Jaju said in a statement.

"Champion is already suspended from the party for three months. A recommendation has been made to the central leadership of the party for his permanent suspension," Jaju said.