Meanwhile, the BJP said it has taken notice of the video. 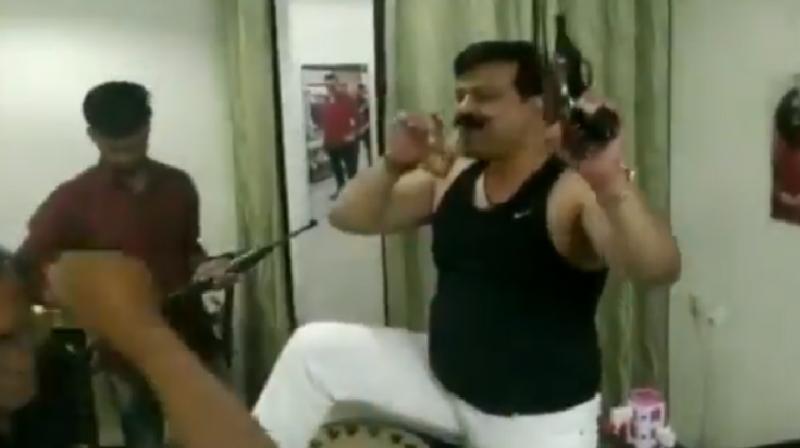 The video showed Champion dancing with more than two pistols and an automatic rifle. (Photo: Screengrab)

Dehradun: Uttarakhand BJP MLA Kunwar Pranav Singh ‘Champion’, who was sacked last month, was seen dancing to a Bollywood number with guns and a drink in hand. The video of the incident has gone viral.

The video showed Champion dancing with more than two pistols and an automatic rifle. Two other men too were seen dancing with the politician.

The undated video came after the controversial MLA from Haridwar was suspended by the BJP for three months after he allegedly misbehaved with journalists.

Meanwhile, the BJP said it has taken notice of the video.

BJP MLA Pranav Champion who was recently suspended from the party for threatening a journalist, seen in a viral video brandishing guns. Police says, "will look into the matter and also verify if the weapons are licensed or not." (Note: Abusive language) pic.twitter.com/AbsApoYR2g

"I've seen that video. I condemn it. These kinds of complaints came against Pranav Singh 'Champion' earlier as well, that's why he was suspended for three months. We'll talk to the Uttarakhand unit about it. Strict action will be taken," the BJP's national media in-charge Anil Baluni said.

"We will look into the matter and also verify if the weapons are licensed or not," a police officer was quoted as saying by news agency ANI.