Union Minister Jayant Sinha's act was seen as a support to cow vigilantes sentenced to life imprisonment in murder. 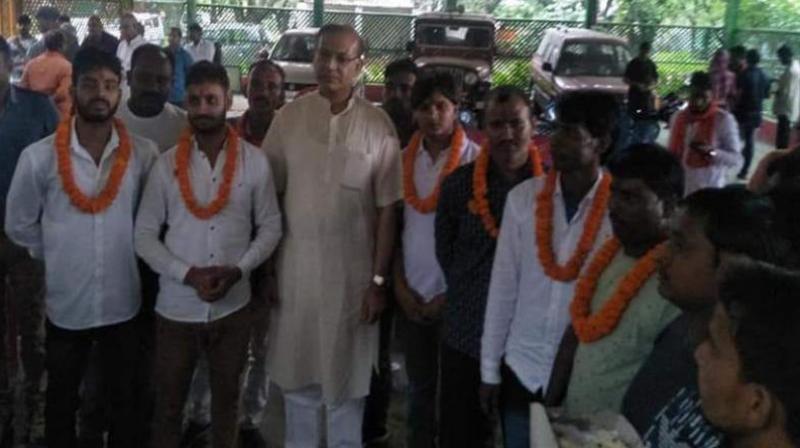 On July 6, a photograph went viral in which the minister was seen garlanding eight convicts out on bail in a lynching and murder case. (Photo: File)

New Delhi: Union Minister Jayant Sinha on Wednesday “expressed regret” over felicitating eight men accused of lynching, after he faced sharp criticism for his act which was seen as a support to cow vigilantes sentenced to life imprisonment in murder.

"I have said many times that the matter is still sub judice. It won't be fair to talk on this. Law will take its own course. We have always worked towards punishing the guilty and sparing the innocent. If by garlanding them (Ramgarh lynching case convicts) an impression has gone out that I support such vigilantism then I express regret over it," the Union Minister was quoted as saying by news agency ANI.

On July 6, a photograph went viral in which the minister was seen garlanding eight convicts out on bail in a lynching and murder case.

Jayant Sinha was not only slammed by the Opposition, but also by his father and former finance minister Yashwant Sinha.

"Earlier, I was the Nalayak Baap of a Layak Beta. Now the roles are reversed,” Yashwant Sinha said adding “I do not approve of my son's action”.

On Tuesday, a petition was started on Change.org which demanded the removal of Jayant Sinha's Harvard Business School alumni status.

Congress president Rahul Gandhi also extended his support to the petition launched by a student of Master of Public Policy at Harvard University, Boston in the US from where Sinha has also graduated.

The Union Minister received flak from other quarters too.

A group of people had lynched Alimuddin Ansari, 40, in Bazaar Tand locality of Jharkhand’s Ramgarh town on June 29, 2017, on the suspicion that he was carrying beef in his car.

In March this year, a fast track court convicted 11 people for lynching. However, last week, the Jharkhand High Court suspended the life sentence of eight persons.