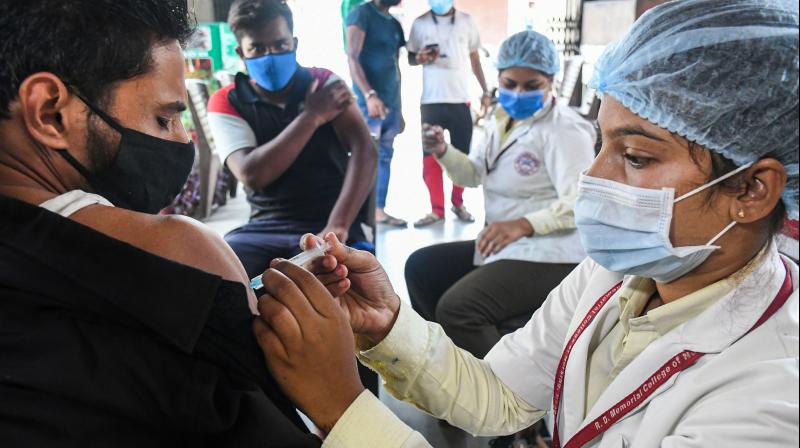 New Delhi: Christian Medical College, Vellore, a 2,600 bed tertiary care hospital in India with 10,600 employees has vaccinated 84.8 per cent staff with majority of them getting Covishield and rest received Covaxin by Bharat Biotech, a latest research done on healthcare workers revealed.

"Christian Medical College, Vellore, a 2,600-bed tertiary care hospital in India with 10,600 employees, vaccinated 8,991 staff (84.8 per cent) between January 21 and April 30. A majority (93.4 per cent) received Covishield, the Oxford-AstraZeneca vaccine manufactured by Serum Institute of India, and the remainder, Covaxin, a killed virus vaccine, produced by Bharat Biotech, India," said the study, "Vaccines are working against infection and severe disease of COVID-19", by CMC Vellore.

Dr. Joy J Mammen, Professor at the Department of Transfusion Medicine, CMC Vellore is the corresponding author of the preprint study .

"We report the incidence of symptomatic COVID-19 infection among HCWs between February 21 and May 19. In the 1,350 staff tested positive on RT-PCR, the median (interquartile range) age was 33 years (27-41); female: male ratio was 3:2. The median time from first dose to development of infection was 77 (62-89) days and coincided with the second peak in India during April and May 2021," the study said.

The HCWs who were fully vaccinated required less hospitalisation, oxygen therapy and even ICU admission.

"The only staff member who died since the beginning of the pandemic had multiple co-morbidities and had not taken the vaccine. Subgroup analysis on the efficacy of the two vaccines was not possible due to few HCWs receiving Covaxin. Some HCWs (17 per cent) could not take the second dose, initially due to vaccine shortage and subsequently despite vaccine availability, due to changes in guidelines on the interval between doses," the study informed.

There are many other studies conducted by other countries that proves vaccination is protective.

In a study from Jerusalem, infection occurred over two-months in 366 (6.9 per cent) of 5,297 vaccinated HCWs and 213 of 754 unvaccinated individuals. A third study from California (n=28,184), showed that only 37 HCWs who received two doses of the vaccine tested positive.

It said, "Our study corroborates these studies that vaccination is protective, although we did not look at the variants responsible for the massive second wave. Beyond the immediate, implications for public health include cost-effective protection from infection, reduction of illness severity and an intervention to break the chain of transmission effectively. Even as many states chose to restrict movement to reduce stress on the healthcare system, we realize that future waves can at best be prevented or at worst mitigated through aggressive and widespread vaccination."