The attack came at a time when the Indian Army and security forces were observing the Ramzan ceasefire. 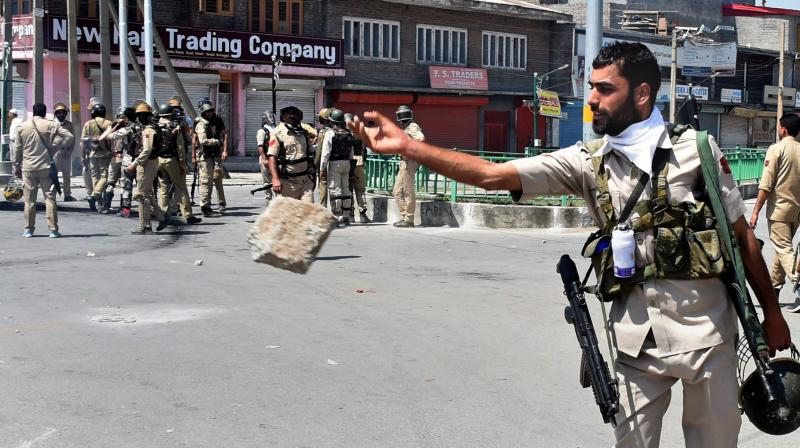 Policemen stands guard after a clash with the protesters in Srinagar on June 2. (Photo: PTI)

Yet another example of deviousness against security forces in Jammu and Kashmir was filing of FIRs against the Central Reserve Police Force (CRPF), who were yet again attacked by a large rioting mob armed with much more than stones.

J&K police registered two FIRs against CRPF’s Srinagar unit related to the Nowhatta incident in May 2018, in which a stone-pelter was run over by a CRPF vehicle when it was trying to escape a violent mob. The FIRs have been filed under sections 307 (attempt to murder), 148 (rioting, armed with deadly weapon) and 279 (rash driving) among other sections, including sections 149, 152, 336 and 427.

The filing of FIRs by the J&K police contradicts its earlier stand conveyed in various posts and retweets by the official Twitter handle of the state police that they were backing the CRPF as their vehicle was just trying to escape the mob. They had also slammed a few journalists for selective and false reporting that the CRPF was attacking innocent Kashmiris whereas it was the CRPF team itself which was under a deadly attack.

A shocking footage of the Nowhatta incident accessed by a TV network on June 1, 2018 showed a large group of violent stone-pelters attacking a CRPF vehicle by trying to vandalise and overpower it. The attack came at a time when the Indian Army and security forces were observing the Ramzan ceasefire. In the clip, it could be clearly seen that CRPF was showing utmost restraint by not firing even a single bullet and carefully driving past even as the video showed, they were being attacked by a large number of rioters throwing stones, bricks and even furniture items and hitting out with iron rods.

While the shocking video was being telecast, former J&K chief minister Omar Abdullah questioned and slammed the Indian Army, his successor Mehbooba Mufti did not comment over the issue at that stage.

Mocking at the Ramzan ceasefire announcement by the Centre, Jaish-e-Mohammad (JeM) chief Masood Azhar said in an audio clip released by the outfit that the ceasefire in Kashmir left open space for JeM and that those of Hizb-ul-Mujahideen (HuM-Kashmiri group raised and supported by Pakistan) in jails would be released very soon with high spirits. “Hope you have not got confused about the news of ceasefire in Kashmir… Our friends have not announced ceasefire; they have left open space for JeM. Now these places will witness more firing from our side,” he said.

In recent months, particularly after the killing of over a dozen terrorists in Shopian and Pulwama districts, police sources say most youths who turned to militancy joined the JeM, which has been behind many big attacks in the Kashmir Valley and has always recruited foreigners (meaning Kashmiri youths) for such strikes.

Founded by Masood Azhar in 1998, the JeM has been one of the deadliest terror organisations responsible for the 2001 attack on Indian Parliament, the 2016 Pathankot airbase attack and many other attacks in J&K till date.

Junaid Qureshi, an Amsterdam-based human rights activist and son of Kashmiri separatist leader Hashim Qureshi, who had hijacked an Indian plane to Lahore in 1971, reportedly said on June 2, 2018 that Kashmiri youth need to understand and question the separatist leaders that “if jihad is so pious then why don’t they or their children pick up guns? All the children of these leaders are tucked away in safe environments in schools in Malaysia, America, London or India, and poor people’s sons are dying on streets and they are glorifying it. The Kashmiri youth need to understand and ask this question to these leaders that if jihad, if this gun is so pious, why don’t you pick it up, why don’t your children pick it up? This bloodshed must stop.”

In another video shown on Indian television networks, an obviously disenchanted youth was addressing senior traitor-separatist leaders with his face covered, lashing out at the hypocritical actions of Syed Ali Shah Geelani and his ilk. The youth blamed the traitor-separatists for politicising deaths and funerals of the very youth, including young children and girls, who they have deprived of education and incited them to take to the streets to attack security forces with not just stones, but also iron rods, petrol bombs and grenades.

Reacting to the renewed aggression on the International Border in the Kanachak sector where two BSF soldiers were killed in Pakistan shelling on June 3, 2018, BJP state president Ravinder Raina said time was fast approaching when India would be left with no option but to strike its neighbour’s territory deep inside.

“Pakistan is testing our patience. If it does not mend its ways, India will lose patience and give it a more befitting reply, much harder than the last surgical strikes,” the state BJP president said but could not specifically answer as to how long India will suffer due to the Union home ministry’s policy of not striking first and giving the enemy an upper hand to attack. “We are a peaceful nation that has global recognition. We are not a terrorist state like Pakistan, which has surrendered its control to the ISI, military and other militant outfits,” he added.

Mr Raina, however, said though the Union home ministry gave consideration for a peaceful ceasefire in the month of Ramzan, which was impiously defied by Pakistan, India would not hesitate in striking back hard to any extent, if required. Referring to Pakistan’s aim of keeping the IB explosive in Jammu province and terrorist ingression from south Kashmir leading to the failure of the state government and Centre, the BJP leader said: “Over the past years, it is for the first time that Pakistan has received continuous blows on its terrorist activities both from across and within the state, which has left it desperate.”

However, chief minister Mehbooba Mufti has been off on a tangent appeasing traitor-separatists and stone-pelters, hundreds of who have been given “amnesty” at her behest in the past. Considering the large numbers of stone-pelters seen often in action, probably all those released by her would be part of these groups.

While ironically Ms Mufti was on the same page as the Pakistan Army’s director-general of military operations, as both appealed for a ceasefire, her government has made an absolute mockery of the attacks both by Pakistan across the IB and by the Valley-based rioting Kashmiris, by booking the CRPF instead of the stone-pelters.

Lambasted fairly well by the Indian Army across the Line of Control, the Pakistan Army has suffered losses of soldiers and structures, something it is not much used to or happy about. In fact, that is why the Pakistan Army, since its inception in 1947, believed in outsourcing, now reduced to a fine art and science.

Over the period from May 17 till June 5, 2018 there were 18 instances of grenade lobbing, three major encounters, two bank robberies, two IED blasts and five attempts of infiltration across the LoC — all foiled by the Army.

While Union home minister Rajnath Singh has made another attempt at amelioration with his visit, it remains to be seen if anything will come out of it, considering that the traitor-separatists are loyally following their Pakistani masters’ orders. Even if Pakistani forces’ guns are silent for this ceasefire, their terrorists and radicalised Kashmiris are active, thanks to the traitor-separatists.