The woman and her family was taken to a hotel in Unnao near her village after her father died in custody on Monday. 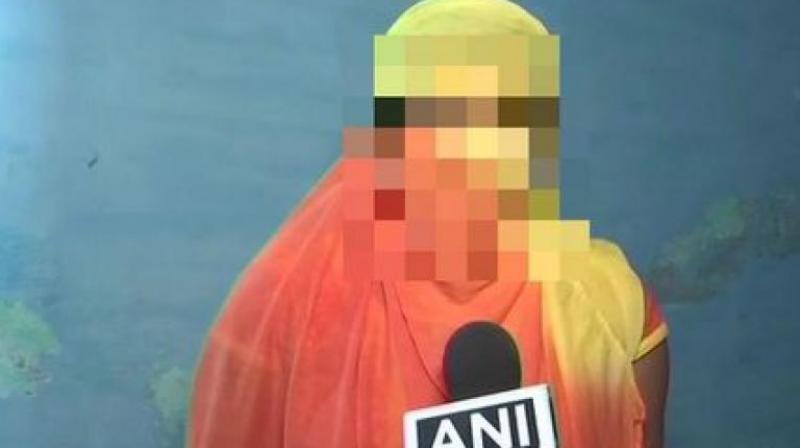 The woman alleges that she was raped by UP BJP MLA Kuldeep Singh Sengar and his brother last June but the family's efforts to bring them to book were repeatedly foiled. (Photo: ANI | Twitter)

Lucknow: An 18-year-old girl who has alleged rape by Uttar Pradesh BJP MP and tried to kill herself outside Chief Minister Yogi Adityanath's house describes prison-like conditions in the name of security as she talks about being confined to a hotel room, “without a phone or water and guards at every corner”.

“I appeal to CM Yogi Adityanath to provide justice. The DM (District Magistrate) has confined me to a hotel room, they are not even serving me water. I just want the culprit to be punished,” news agency ANI quoted the victim saying.

The woman and her family was taken to a hotel in Unnao near her village after her father died in custody on Monday, days after being beaten up by ruling lawmaker Kuldeep Singh Sengar's brother.

The father of the Unnao rape victim was arrested after he was assaulted. The postmortem report details 14 severe injuries that underline the severity of the attack. After his death, Jaideep Singh, the brother of the MLA, was arrested for the assault.

The postmortem report lists multiple abrasions near his abdomen, buttocks, thighs, knees and arms. It, however, listed blood poisoning due to perforation of colon as the cause of death.

The 55-year-old rape victim’s father was allegedly beaten by BJP MLA Kuldeep Singh Sengar’s men last Tuesday, after he refused to withdraw the complaint of rape by his daughter.

“We are told we can't go outside, there are guards at every corner. When we ask them for help, they say it isn't their job. Is this justice?” the rape victim said.
“I want justice, why are they pressuring me for an apology? Do they want my uncle to be killed too?” the victim added.

The woman alleges that she was raped by BJP MLA Kuldeep Singh Sengar and his brother last June. But the family's efforts to bring them to book were repeatedly foiled, she said.

Kuldeep Singh Sengar has accused the family of maligning him since he tried to protect four young men whom the girl had accused of rape. He has also refused to resign and attributed the beating of the girl's father to a "family divide".

The rape victim is demanding the case to be handed over to Central Bureau of Investigation (CBI) and alleged that the administration has done little to ensure the security of women in the state.

"Yogiji had promised to make Uttar Pradesh crime-free. But, this has not happened in reality. He always makes lofty statements. Is this justice of Yogiji?" If the government doesn't support us, we will commit suicide," said the victim.