'Trump's slogan 'America First' and the Centre's initiative 'Make in India' are not incompatible,' says Juster. 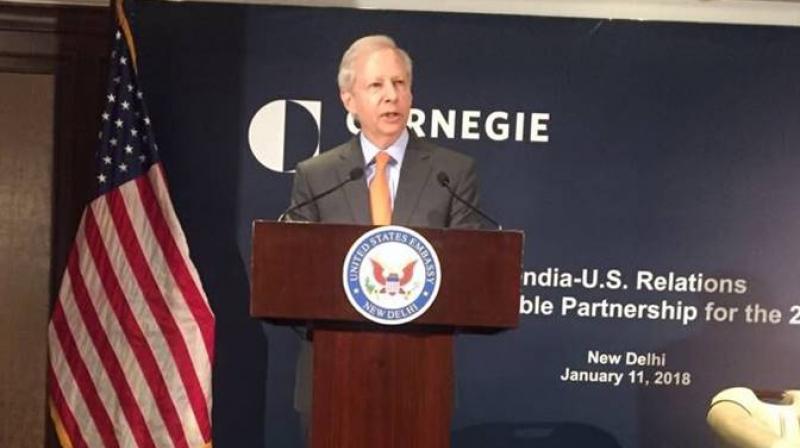 In his first policy speech since taking over as ambassador, Juster laid out the Trump administration's agenda for India and emphasised that the US will not tolerate 'cross-border terrorism' or terror safe havens. (Photo: Twitter)

In his first policy speech since taking over as ambassador, Juster laid out the Trump administration's agenda for India and emphasised that the US will not tolerate "cross-border terrorism" or terror safe havens.

However, Juster made no reference to Pakistan in his speech. The US recently suspended military aid to Islamabad, accusing it of "lies and deceit".

Juster acknowledged that the US and India initially had "strained" exchanges on topics related to the transfer of sensitive US technology with both military and conventional applications.

"Now, India is celebrating its membership in two of the four multilateral export control regimes -- the Wassenaar Arrangement on dual-use items, which India just joined, and the Missile Technology Control Regime."

"We also expect in the very near future for India to join the Australia Group on chemical and biological weapons. And we are working closely with India and our international partners to secure India's membership in the Nuclear Suppliers Group," he said.

Juster said shared values and "common interests" inform the vision of New Delhi and Washington for the strategically significant Indo-Pacific region, in which the US considers India to be a "leading power".

On defence and counter-terrorism, Juster observed that both India and the US have suffered "horrific terrorist attacks" and continue to be targeted.

"We have a strong mutual interest in eliminating this threat to our societies. President Trump and other US leaders have been clear that we will not tolerate cross-border terrorism or terrorist safe havens anywhere," he said.

A major part of Juster's speech was on ways to enhance economic and commercial relations. He also underlined that the US is concerned about persistent trade deficits with India. He stated that a number of US companies have reported "increasing difficulties" in conducting business in China.

Accordingly, some companies are downgrading their operations there, while others are looking with great interest at alternative markets.

"India can seize the strategic opportunity through trade and investment to become an alternative hub for US business in the Indo-Pacific region," he said, adding that Trump's poll slogan 'America First' and the Centre's flagship initiative 'Make in India' are not incompatible.