None of the elected governments in J&K prevented the spread of anti-India sentiment and activities. 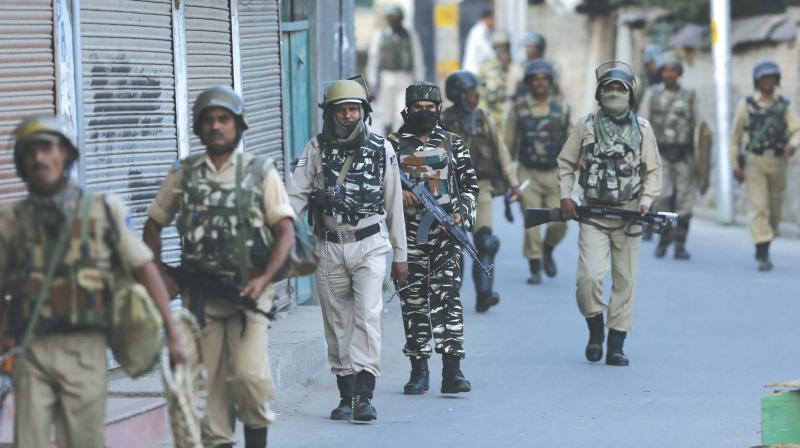 Paramilitary soldiers return to their base camp as they lift restrictions in Srinagar. (Photo: AFP)

At long last, after proving its high threshold for tolerating all kinds of anti-national activities in Jammu and Kashmir (J&K), the BJP government imposed the Governor’s Rule. Over many years and much more since 2016, the Kashmir Valley was sundered with countless heightened acts of terrorism, radicalisation, destruction of schools, selective atrocious killings of good/patriotic Kashmiris, victimisation of Army/security forces (SFs) etc, not to mention many decades of mis-governance by successive governments.

While the decision to impose the Governor’s Rule is a result of political will, much higher degrees of it will be required to take more hard decisions and ensure their implementation because that is the only way to retrieve the seriously infected/contaminated part of the Kashmir Valley, which not only affects the entire state but also the country’s security.

The immediate priority is ensuring a smooth and secure Amarnath pilgrimage, given the terrorist threat and weather, alongside, tourism will have to be covered similarly. Even on July 8,2018, the pilgrimage had to be suspended owing to separatists glorifying the death anniversary of a hardcore terrorist leader.

The large community of minor traders for whom tourism provides sustenance have suffered greatly and the BJP government must seriously consider some relief measures for them.

Education, which has since long been majority targeted by Pakistan through the Valley-based separatists and dealt a body blow with the destruction of almost 40 schools, will need an urgent and sustained boost.

Ruining the education system in the Valley was also linked to the process of radicalisation. The aim of Pakistan’s military and mullahs is to destroy education on one hand and on the other to indoctrinate and incite people, particularly youth. While in earlier years radicalisation was carried out through separatist leaders, clerics and religious/political gatherings, information technology and social media gave it a massive boost.

None of the elected governments in J&K prevented the spread of anti-India sentiment and activities. Pakistani and even ISIS flags, pro-Pakistani and anti-India slogans were tolerated or ignored. In fact, both the National Conference and People’s Democratic Party pandered to Pakistan/pro-Pakistan elements, forgetting how the Valley had been exploited by Pakistan in the late 1980s. Thanks to the Indian Army’s vigil on the Line of Control (LoC). Terrorism was reduced to the extent that tourism began to flourish once again and it became too much for Pakistan’s directors of anti-India operations. New tactics, like paid stone-pelting, were developed to raise them to the level of hectoring the Army and SFs during their operations. PDP went even further by filing FIRs against Army and SF personnel for doing their duty while being stoned and even petrol-bombed.

After the abductions and brutal murders of Kashmiri Army personnel, including Lt. Umar Fayaz, many Kashmiri J&K police personnel and finally rifleman Aurangzed and Rising Kashmir editor Shujaat Bukhari during the ramzan ceasefire, the BJP decided to pull out of the alliance and promulgate Governor’s Rule. One of the reasons for all these murders and for many other problems in the Valley are that over the past decades, particularly in the last few years, truth, facts and history became major casualties. Kashmiris have not only been killed by Pakistani terrorists but also by Pak-supported Kashmiri terrorists and recently even radicalised youth.

While addressing the major challenges during this eighth spell of Governor’s Rule, decision-makers will be well advised to revisit the state’s history, geography and demography and review some basic facts about the state, which should be factored in. For seven decades, political leaders from New Delhi have endlessly been parroting that J&K is India’s “atoot ang” (unbreakable part), the hard decisions required to run this state so that it remains an unbreakable part.

By the end of 1980s, at least 5,00,000 Kashmiri pandits/saraswat brahmins, the original inhabitants of the land named after the sage, Kashyap, were threatened and intimidated by Pakistan-paid Kashmiri separatists, their network and followers, many were killed and finally over 4,00,000 were forced to flee, leaving behind their belongings and properties.

Of the 22 districts in J&K, there are only five districts where separatists hold sway and organise anti-India operations — Srinagar, Anantnag, Baramullah, Kulgam and Pulwama. These are where stone-pelting, hoisting of Pakistani and ISIS flags and anti-India demonstrations are held. Interestingly, these five districts are far away from the LoC. The other 17 districts, including some along the LoC, are fully pro-India. So separatist’s writ runs in just 15% of the population which is Sunni Muslim dominated. Majority of the people in J&K do not speak Kashmiri as their mother tongue. They speak Dogri, Gujjari, Punjabi, Ladhaki , Pahari etc. Only 33% people in Kashmir speak Kashmiri and this group has controlled the narrative from Hurriyat to terrorists and from NC and PDP and thereby, bureaucracy, business and agriculture. This Sunni dominated 33% is opposed to India although population of all other Muslims in J&K is 69 %.

The state of J&K, which includes Ladakh (excluding Pakistan-occupied Kashmir), has an area of 101380 sq kms, of which 26% is Jammu, 15% is Kashmir and 59% is Ladakh. Considering this fact, the state should really have been named Ladakh, Jammu, Kashmir. It is worth considering to do so even now.

Jammu, with a population of 53,00,000 comprises people speaking Dogri, Punjabi and Hindi. 3,00,000 people of Ladakh speak the Ladakhi language. There are 7,50,000 people settled in the State, who have not been granted the State’s citizenship.

More than 14 major religious/ethnic groups, amounting to 85% of the population of J&K, are pro-India. These include Shias, Dogras (Rajputs, Brahmins and Mahajans), Kashmiri Pandits, Sikhs, Buddhists (Ladakhis ), Gujjars, Bakarwals, Paharis, Baltis, Christians and others.

Shias (12%), Gujjar Muslims (14%), Pahadi Muslims ( 8%), Buddhists , Pandits, Sufis, Christians and Jammu Hindus/ Dogras   (approximately 45%) are totally opposed to separatism and Pakistan. Poonch and Kargil have above 90% Muslim population. There has never been an anti India or separatist protest in these districts.

Separatists also control a section of the media in J&K, which carries/contributes to anti-Indian propaganda/sentiment and also tries to create the  impression that all of J&K is against India.

It is high time a long overdue course-correction is done in J&K. If the Constitution of India stipulates that the provisions related to Article 370 for J&K are of “purely temporary nature”, then all the more reason that for the vital cause of India’s integrity and security, it is abrogated.

Some of many other steps required are:

With too much at stake, it is time to cross the Rubicon-the Jhelum in this case.