J&K police registered FIR against lawyers who tried to stop it from filing chargesheet against 7 accused in rape, murder of 8-yr-old girl. 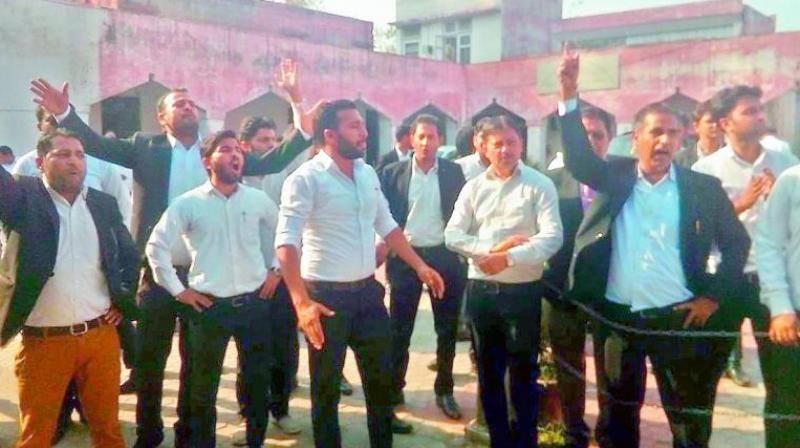 A group of lawyers had tried to prevent police from filing a chargesheet against seven accused in alleged rape and murder of an 8-year-old nomad girl in a court in Kathua district on Monday. (Photo: Agencies)

Srinagar: Jammu and Kashmir police on Tuesday registered a First Information Report (FIR) against a group of lawyers who had come in its way and tried to prevent it from filing a chargesheet against seven accused in alleged rape and murder of an 8-year-old nomad girl in a court in Kathua district on Monday.

The Crime Branch of J&K Police filed the chargesheet against the accused including two Special Police Officers (SPOs) and a police Sub-Inspector and a Head-Constable in the Chief Judicial Magistrate (CJM’s) court in spite of resistance by local lawyers. Ironically the judge had also shown reluctance in accepting the chargesheet initially.

The victim went missing while grazing horses in Rasana village of Hiranagar tehsil of Kathua on January 17. A week later, her body was found in woods near her village. The alleged rape and murder of the minor evoked widespread outrage in Jammu and Kashmir.

The officials said that the Crime Branch which has been probing the gory incident on Tuesday filed a separate chargesheet against another accused in the case, who was earlier said to be a juvenile, in the Kathua court.

The rape and murder incident took a political and communal colour after the Crime Branch laid its hands on SPO Deepak Khajuria, the main accused, with voices being raised by local Hindu community that the case be handed over to the Central Bureau of Investigation (CBI). A group of local people, including the relatives of the accused, are currently on ‘fast-unto-death’ in support of the demand.

J&K’s DGP Shesh Paul Vaid alarmed over the situation turning uglier had appealed to people not to give the incident a ‘political’ or ‘religious’ colour and assured the culprits would not be spared but brought to book. “The J&K police is not going to compromise on any angle,” he had said.

But the incident took a strange turn later when a large number of people of Kathua took to the streets, waving the national flag and demanding an unconditional release of Khajuria. The photographs of the protest march went viral on social media and Chief Minister, Mehbooba Mufti, shocked over the “abuse” of the national flag hit out at the protesters and reiterated that the law will take its own course.

In a huge embarrassment to the Chief Minister, two of her senior ministers from ally BJP Chander Prakash Ganga and Chowhary Lal Singh also joined the protesters to seek investigations into the rape-and-murder case instead of the Crime Branch of the J&K police by CBI on the plea the local people had expressed lack of faith in police investigation. But the Chief Minister out rightly rejected the demand.

DGP Vaid confirmed that FIR has been registered against lawyers of Kathua Bar Association for preventing the Crime Branch from filing a charge sheet against the accused in the court of CJM Kathua. The bizarre act by the lawyers had shocked various sections of the society and had evoked sharp criticism by various political and social organisations.

Kathua’s SSP Seleiman Choudhary said that the FIR has been registered against the Kathua lawyers under sections 353 (assault or use of criminal force to deter a public servant from discharging his duty, 147 (rioting), 341 (wrongful restraint) of Ranbir Penal Code.

Former Chief Minister and opposition National Conference (NC) working president, Omar Abdullah, welcomed the police’s move against lawyers and taking to Twitter he said, “Good. Lawyers who have no respect for the law deserve to have the full weight of the law books crash down on them.”

Jammu High Court Bar Association (JHCBA), the main organization of Jammu lawyers, is on strike since Thursday in support of various demands including handing over the Kathua rape-cum-murder case to CBI and eviction of Rohingya and Bangladeshi refugees from Jammu as it considers them a “security threat”. It has called for a Jammu bandh on Wednesday.

However, JHCBA’s call on Tuesday received a setback when Jammu Chamber of Commerce and Industry (JCCI) disassociated itself from it saying that the Chamber and other important organizations were not taken into confidence before announcing the shutdown call.

Rakesh Gupta, president of JCCI said, “JCCI has always considered the JHCBA as an elderly body but we are not supporting Jammu Bandh announced by the Bar Association.”

He said that JCCI was first to raise Rohingya issue but now it is sub-judice in the Supreme Court and that the Union Home Ministry has issued a direction and restricted fresh settlement of Rohingyas in J&K “so there is no logic to agitate over this.”

On Kathua rape and murder issue, he said that the investigation of Crime Branch was being monitored by the High Court and the charge sheet has also been filed “so it is also sub-judice.”

The sections of lawyers in Poonch and Rajouri districts of Jammu region, too, have dissociated themselves from the shutdown call saying the Crime Branch should continue to investigate the rape and murder case and that the lawyers of Jammu may contest the charge sheet in the court instead of coming on roads.

The chargesheets have been filed few days after DNA test confirmed that the victim was held captive inside Rasana’s Deasthan temple before being strangulated after rape. Among the accused is a former revenue official and the alleged conspirator and custodian of the temple Sanji Ram (60) who surrendered before the Crime Branch on March 20 after his son Vishal Kumar was taken into custody by the police in Uttar Pradesh.

The Crime Branch officials said that they had received the forensic test reports which confirmed that the girl was held hostage at temple premises, drugged and raped several times before being murdered by SPO Khajuria.